It is impossible to argue with confirmed data – since 2015, the number of early stages financing rounds have steadily declined. A special IVC analysis examined the number and amounts of capital raised in early stages (seed + R&D) and found a noticeable decrease of 51 percent from 746 deals in 2015 to 367 deals in 2017 (updated to December 2017). Despite the dramatic slump in the number of deals, the drop in the total amount raised by early stage companies has not been as steep – from $1.32 billion in 2015 to $1.15 billion in 2017 – a drop of 13 percent. The point is evident, however: life as an early stage company has become harder.

The difference between the change in the number of deals and the amount of capital raised implies that investors are no longer as keen as before to be involved in early stages. Since capital is still available, their choice is driven by other factors. Investments in early stages are the riskiest, and many of these companies fail. After few consecutive years of hype, investors tend to focus on existing portfolio companies or invest in more mature companies. The gloomy change in the seed and pre-seed rounds is reflected in the IVC-ZAG Quarterly reviews (High-Tech Capital Raising).

This is bad news for entrepreneurs starting a new enterprise these days. Completing a financing round in early stage is expected to be harder and take longer.

A sluggish time for early stages is not only evident in Israel – it’s a global trend. In the U.S., media reports are bleak, declaring the end of an era – early stages are out. In November, several tech blogs dealt with the issue: “The early stage slump”1 or: “…an implosion of early stage VC funding and no one’s talking about it”.2. The numbers are clear; globally the amount of capital raised by early stage tech companies has been dropping since 2015, after rising in 2008-2014. 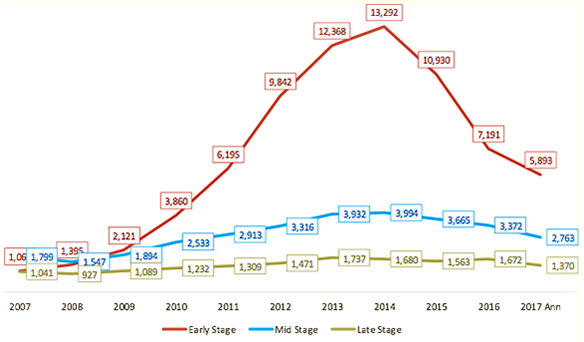 It appears that investors are making fewer deals, but when they find a deal they believe in, they are still willing to pay. It shouldn’t have been a surprise; signs of the change in the VC stage-preference appeared in early 2016. However, statistics about early stages capital raising could be just a signal that a bigger down round in the overall high-tech capital raising sentiment is on the way.

In this article:Finance, startups, Investments