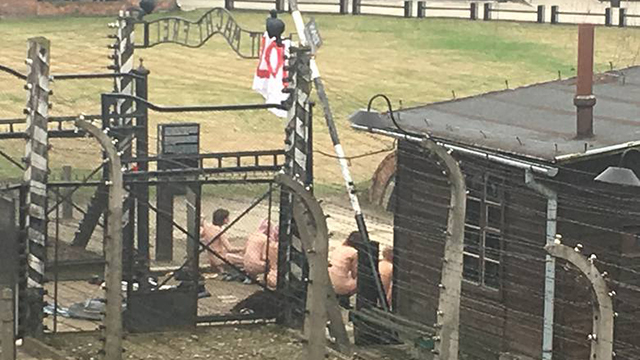 A Polish court convicted twelve people on Wednesday for staging a protest last year in which they stripped naked at the Nazi Auschwitz death camp and slaughtered a lamb.

Two of those convicted were sentenced to more than a year in prison, while the remaining ten were ordered to pay a financial penalty.

Six of the protesters, all of whom are aged 20 – 27, were Polish, while the other activists were from Belarus and Germany.

The group tied themselves to the entrance of the camp under the infamous “Arbeit Macht Frei” sign, meaning “Work sets you free.”

The motive behind the obscene demonstration was not immediately clear to the authorities, but the group later explained that it was staged in protest against the war in Ukraine.

The group used firecrackers during their demonstration and hung on the gate a white sign bearing the word in red, “Love.”

“These people violated the respect of one of the most tragic places on earth,” said the director of the Auschwitz memorial. “Using Auschwitz for a protest, for whatever reason, is completely unacceptable.”

Killing an animal carries a punishment of up to two years in prison in Poland. Moreover, Polish law enables judges to hand down sentences, also of up to two years, to people who desecrate the former death camp, where more than one million people, the majority of whom were Jews, were slaughtered.