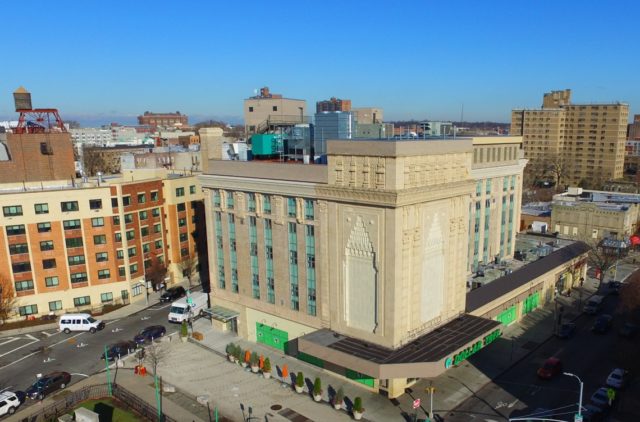 The former historic movie theater, known as The Pitkin, in Brooklyn has been acquired by investor Shulem Herman for $53 million, making it the most expensive single-building deal ever seen in Brownsville neighborhood.

The beautiful 165,000 SF building, that dates back to 1929, underwent in 2012 a full interior restoration and was transformed into a mixed-use, retail, and education facility by developers POKO Partners.

Herman, who controls the entities Pitkin Terrace LLC and Herman Holdings LLC, plans to keep the property largely as is, according to The Real Deal.

Currently, the building is occupied by three national tenants on the ground floor – Pizza Hut, Subway and Dollar Tree – and one of the most established charter schools in New York City, Ascend Charter School, located throughout the remainder of the building. The three retail spaces combine for approximately 12,371 SF, with the remaining approximately 152,404 SF dedicated to the charter school.

The highly visible property still maintains its incredible exterior design. In its heyday, The Pitkin had an almost 3,000-person capacity and some of the great performers of the day such as Milton Berle, Humphrey Bogart, and Jackie Gleason appeared there. It sits in proximity to the 2, 3, 4 and 5 trains at Sutter Avenue – Rutland Road.

The Ascend Public Charter School in this property was renovated to include the most modern classroom, office, cafeteria and gym spaces, unmatched by most public and private schools in NYC. This year, the Brownsville Ascend Charter School is serving over 700 students in kindergarten through fifth grade.

In this article:Finance, real estate in New York