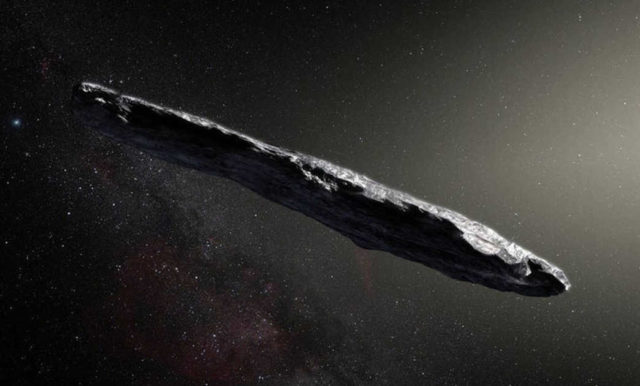 Astronomers from the University of Hawaii spotted a mysterious object in October passing the Earth. The object was originally thought to be a comet or an asteroid. But, then, they said that it was made of something heavy, most likely metal.

The cigar-shaped object, first seen phenomenon, is about a quarter of a mile long, 260ft wide and hurtling through our solar system at almost 200,000 mph.

Now, a group of scientists, leading by Stephen Hawking, investigating into whether the object which has arrived from OUTSIDE our solar system is a spaceship from an alien civilization. It is the first object that appears to have originated from another part of the galaxy.

Professor of astrophysics at Harvard University Avi Loeb said: “Perhaps the aliens have a mothership that travels fast and releases baby spacecrafts that freely fall into the planetary system on a reconnaissance mission.

The team is using the world’s largest radio telescope at Green Bank, West Virginia, to track the celestial object named “Oumuamua” for ten hours. They are trying to catch up electromagnetic signals which cannot be produced in nature.

Breakthrough Listen said: “Researchers working on long-distance space transportation have previously suggested that a cigar or needle shape is the most likely architecture for an interstellar spacecraft, since this would minimise friction and damage from interstellar gas and dust.”

Hoping the lack of an update from #BreakthroughListen is because they’re busy deciphering the radio signals https://t.co/gpC7cJnNSW