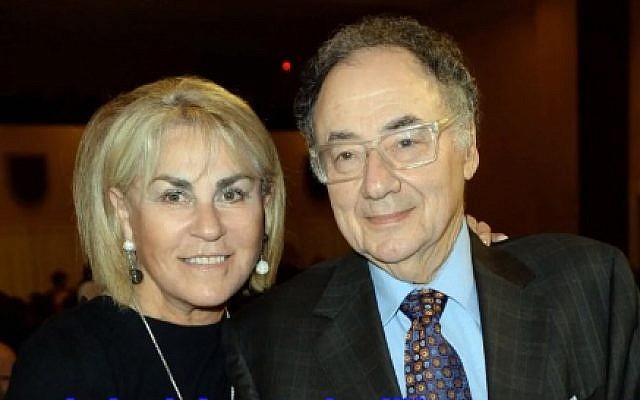 Canadian pharmaceuticals billionaire and philanthropist Barry Sherman and his wife Honey were reportedly found dead in their mansion on Friday. Toronto police suspect Sherman, founder of Apotex Inc, killed his wife and then himself.

The Toronto Sun and Mail reported that the couple found “hanging from a railing on the edge of a basement swimming pool inside the house.” the police had not found a suicide note and were searching the mansion for evidence.

Unidentified police sources said the tragedy considering “that Mr. Sherman killed his wife, hung her body and then hanged himself at the pool’s edge,” according to the source.

Authorities were conducting post-mortem examinations on Saturday and treating the deaths as suspicious. A Toronto Police spokesman said that nothing had been ruled out in the probe.

The newspapers reported that investigators were working on the theory that Barry Sherman, 75, killed his wife, hung her body and then hanged himself at the pool’s edge.

The couple’s children published a statement: “Our parents shared an enthusiasm for life and commitment to their family and community totally inconsistent with the rumors regrettably circulated in the media as to the circumstances surrounding their deaths,” it said.
“We are shocked and think it’s irresponsible that police sources have reportedly advised the media of a theory which neither their family, their friends nor their colleagues believe to be true.” The children called for a “thorough, intensive and objective criminal investigation.”

“There’s a whole bunch of different scenarios here. We are not ruling anything out,” he said. He declined to say how or where the bodies were found in the home.

“As you can imagine, this is a pretty challenging time right now for everybody,” Apotex spokesman Jordan Berman said.

Barry Sherman was a prominent donor to Canada’s ruling Liberal Party, drawing on a fortune that Forbes estimated at $3.2 billion. Canadian advocacy group Democracy Watch criticized him last year for involvement in a fundraiser for the Liberals while registered as a government lobbyist.

Sherman founded generic drugmaker Apotex in 1974, building it into one of the world’s largest pharmaceutical makers. It has annual sales of more than C$2 billion in more than 45 countries, according to Apotex website.

He stepped down as CEO in 2012, but stayed on as chairman.

Sherman was involved in a series of lawsuits, including a decade-long battle with cousins seeking compensation over allegations he cut them out of the company that would make him rich.

Sophie and I are saddened by news of the sudden passing of Barry and Honey Sherman. Our condolences to their family & friends, and to everyone touched by their vision & spirit.

Authorities have not said who made the call, though Canadian media reported the couple’s bodies were found by a real estate agent helping them sell their home, which was on the market for C$6.9 million ($5.4 million).

The Shermans, who had four children, were major donors to hospitals, universities and donating $50 million Canadian (U.S. $39 million) to the United Jewish Appeal.

He had also become an active fundraiser for Prime Minister Justin Trudeau’s Liberal Party in recent years, but was criticized for holding a pay-for-access fundraiser in August 2015 that included Trudeau while being registered as a lobbyist.

Honey Sherman sat on the boards of several hospital, charitable and Jewish foundations, and last month was awarded a Senate medal for community service.

She immigrated to Canada as a child when Jewish Immigrant Aid Services relocated her family shortly after the Holocaust, according to a profile of the couple on the Jewish Foundation of Greater Toronto’s website.

Reuters contributed to this report