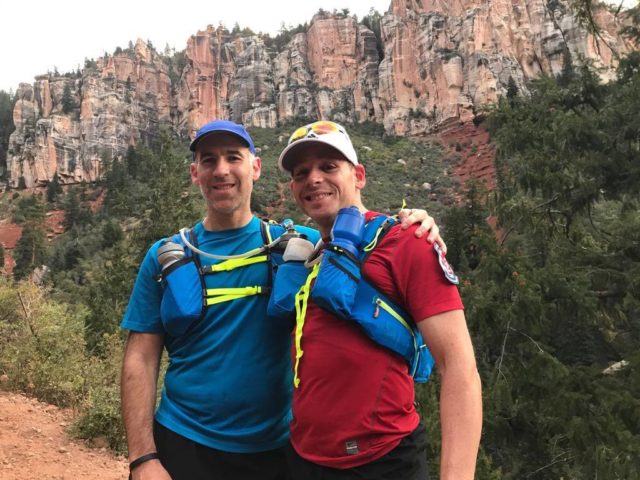 On Sunday (Sept. 17) the family and friends of Ezra Schwartz, who was killed in a terrorist attack in Israel 2 years ago, gathered to commemorate his memory by completing a Rim Run course. Team Ezra have competed a course of 33 km from the North Rim of Grand Canyon to the bottom and back up to the South rim (20.6 miles in total). The event was also dedicated to OneFamily, an Israeli NGO which helps victims of terror. Thirteen thousand USD were raised to help bereaved families in Israel.

Ezra Schwartz, 18, of Sharon, Massachusetts was one of three people killed when a Palestinian terrorist opened fire with a submachine gun at cars stuck in a traffic jam at the Alon Shvut junction, just south of Jerusalem. Ezra was a US citizen and a student in Beit Shemesh. Ezra came to Israel as part of a nine-month volunteer program. The group of volunteers had traveled to the area in order to help clean up the Oz Ve’Gaon park, named after the three boys who were kidnapped and killed a year earlier, in a terror attack after which Israel launched Operation Protective Edge in Gaza.

After the run was completed, Ari, Ezra’s father read a letter he wrote to Ezra on the occasion of Ezra’s 20th birthday this year, a birthday he never lived to celebrate.

Before I start, I wanted you to know that Uncle Peter, Rachel Grant, Stephen Hersh, Dov Gertzulin, Josh Tenzer, Andrea Wolf, Lauren Stark, David Katz, Sheldon Hanau, Josh Kosowsky, and Daniel Rosen traveled here and hiked from Rim to Rim in order to celebrate your life. Noam Drazin and Naomi Gable wanted to be here but an injury forced them to drop out. I wont forget the amount of time and effort they sacrificed in order to make it to this point. I also wanted you to know Ezra that One Family has helped us go on despite your absence and we are happy to be raising money for that wonderful organization.

Ezra, Boat Beach was a special place. It’s where our family’s greatest adventure began and its fitting that we stand here to discuss the great things you did in your life. I wanted to thank you for all of those wonderful memories.

Ezra, thank you for the 18 years we had together. We did so many amazing things and you lived your life with an inspiring amount of energy and fun and excitement while always being able to pause to have compassion for others. When you loved to do something, you did it with so much energy and happiness that it was contagious, making everyone else happier and more excited. Your energy was never as apparent as when we spent a week here in the Grand Canyon. It started when you volunteered to hike down the Bright Angel trail with your little brothers. You could have taken the mules down but I remember so vividly you sitting in the living room when we begin to discuss this and without any hesitation you jumped in and stated “I’ll hike down”. I remember it so vividly because it started our whole trip off in the right direction. We needed one volunteer to hike and I looked into your eyes when you volunteered and I could see how excited you were and there was not a second thought of the difficulty or the challenge and true to your personality, you were all in, excited, happy, no caring as to who was going with the mules, no caring about who got the best deal. You just announced that you were walking and you were happy to do it. Elon and Avi who were 6 and 8 at the time, looked up to you and suddenly they were proud to be walking with their big brother. 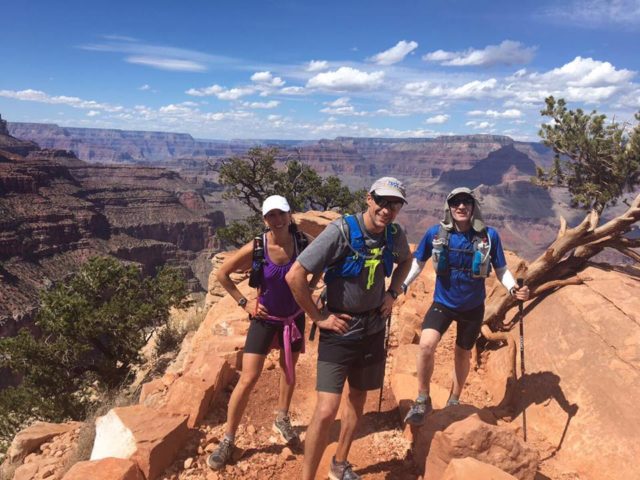 Thank you Ezra for one of the most memorable parts of our Grand Canyon trip. On our last night camping in the canyon, after we stopped to pitch our tents and have dinner, I asked if anyone wanted to explore one of the side canyons. You were the only one to say yes. Do you remember how quiet and secluded it was? Do you remember the strange rock formations and how narrow that little canyon was? There was water in pools and a small stream and our route was blocked by water and we went back-and-forth climbing along the canyon walls meandering our way through this maze that was more interesting and more amazing than I can describe. So unique and so unlike any place or rock formation we had ever seen. And we kept finding different routes and different ways up, climbing along the walls of the canyon until we both agreed that the next step was too high and too dangerous and we had to turn back. Thank you for having the energy to explore with me.

We did a lot of exploring together. When we skied in the trees we would get lost together with no fear and no worry if the trees got too thick or we came upon cliffs. We would just take off our skis or find another path. Most people we skied with didn’t have the patience to explore and find weird nooks and crannies. Any place where we could squeeze our skis on snow was good for us. Ezra, you were just like me enjoying finding places in ski resorts where nobody else had gone. You enjoyed taking your brothers to those places just like I took you. Even when they were slow and not as accomplished, you picked up their skis, you brushed powder off their backs and you waited for them because you remembered how Mollie and I did the same for you. You were always so patient on the mountains especially with your friends.

Thank you, Ezra for always wanting me to watch you when we skied. Thank you for always asking me to video you. Thank you for always wanting to be right behind me when you were younger. No matter how fast I would go you would do anything to keep up, but often it meant a massive tumble, like the one on Trainors in Aspen where you developed a massive headache because you were so stressed that you couldn’t yet keep up with me and my ski partners on the hardest terrain. A few years later, my last vivid image of you skiing in Aspen was you plowing through the trees and moguls and powder on to the left of Snyder’s ridge, at a speed where I realized that you were now bombing down runs faster than I could ski and I was proud that you were now better than me. It seems like yesterday that we were on the bunny hill at Mount Snow and I can clearly picture you making your first turns by twisting your arm sideways to help your body move in the direction that would help you turn. Thank you for that memory.

Thank you Ezra for rooting for the Yankees when I told you it would be fine for you to root for the Red Sox like your friends. But you wanted to be a Yankee fan like me. There was no way that your brothers were not going to follow your lead and now because of you we all root and enjoy those games together.
You had such a big impact on our lives and while you were such an important role model and friend for your brothers, you were perhaps an even better brother to your sister. Thank you for caring so deeply for her. You were always so proud of her and you trusted her and she trusted you. You helped to give Mollie confidence and security and those are gifts she will always keep from you. 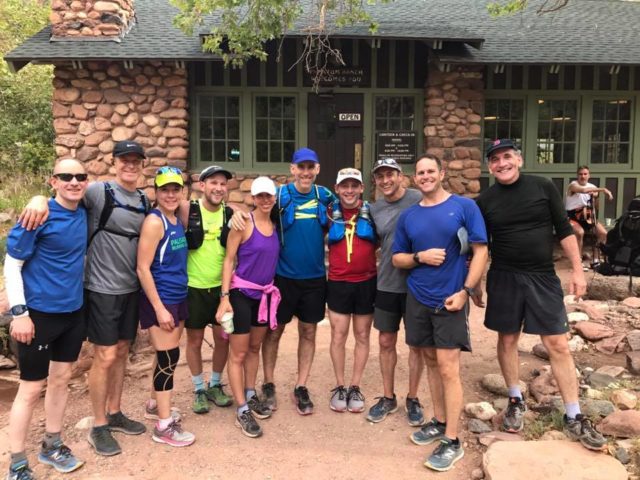 Thank you, Ezra, for teaching us about self-confidence. I never met anyone who seemingly lacked insecurities. You played with your brothers instead of your friends because wiffle ball was more fun. You never put stuff in your hair because you were unconcerned about your appearance (to some degree). You could hang out with so many different types of people because you didn’t care what other people thought. When you first announced that you were going out with Ilana your brothers tried to tease you like they teased Mollie. But you were just proud, unflappable. You were so proud to be going to Rutgers and comfortably let people know which schools rejected you. I was always so impressed when you quickly and easily stated your list and where you did not get it in. Thank you! You taught us to be proud of who we are and not to be ashamed of rejections or setbacks. They happen to everyone.

The thankyous could go on forever. There were so many things you were good at. You were so unique and so devoted and so caring. It’s those qualities that resulted in hundreds of letters and notes from friends, and family and counselors and campers and teachers. It’s those letters that have kept you so alive and thriving. It’s thoughts of you that helped to inspire me and many others to live life a little out of our comfort zone. It’s you who inspired me to stand behind the backstop whenever I root for your brothers when they play baseball. You told me that it helps when you hear people cheering for you when you play and so now, that’s what I do, even though it makes me embarrassed.

And finally Ezra, it’s you who inspired this trip. If we live life fearing the things we think we can’t do, we will never do them. For me, I didn’t fear the run, I feared being so public about anything that I do but you pushed me. For others here, they feared not being able to complete the grandest of the grand hikes, but they are here anyway and we will all, forever be thankful that you pushed us to do this.

I expect that you will continue to push me and mom and your brothers and sister and your friends and so many in this world who never knew you.