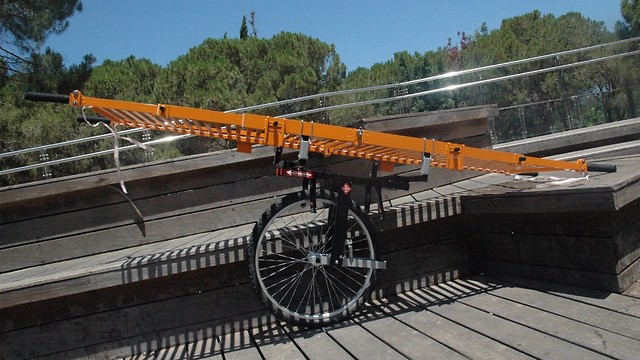 Technion Students have created a new type of backboard stretcher for emergency medical situations that adapts for use in difficult terrain. The new backboard, which can also serve as a stretcher, allows the patient to be transported quickly over long distances by two people, without tiring out those holding the patient. This is done by hooking up the stretcher to a large bicycle wheel that is employed to carry most of the weight of the patient, allowing first responders to transport the patient from their location in the field to the waiting ambulance quickly and without exhausting themselves in the process.

The new apparatus is being called the Adventure Stretcher and was created as part of a final project by two engineering students from the Technion, Michael Addah, and Ro’ee Eytanash in collaboration with Segal Bikes, the Israelife Foundation and United Hatzalah.

It is lightweight, collapsible, and adheres to the standards of regular backboards and stretchers already being used in the field by EMS teams.

The concept was originally conceived of by a United Hatzalah volunteer EMT, Dan Shafry, who works as an engineer in Rafael Industries. It was then developed further by consulting with experts in the field including Israel’s Search and Rescue Unit volunteer paramedic Micky Fischler. The Search and Rescue Units are supported by the Israelife Foundation which partnered with Segal Bikes to split the bill for building the prototype Adventure Stretcher.

Fischler said that the Adventure Stretcher “was developed in order to provide a viable option to carry injured persons over long distances without exhausting EMS and Search and Rescue responders. At times accidents happen on bicycle trails or hiking paths that are not accessible by any vehicle including helicopters. Having a lightweight stretcher option, that can carry the weight of the patient so as not to exhaust responders is something that will be very useful in the field. This stretcher is compact and does not weigh down the responders who need to carry the apparatus both to and from the scene of the accident, often for long distances. We need to carry other heavy items such as water, cables and climbing gear, and having a lightweight stretcher that can serve as a backboard and is collapsible, will be invaluable.”

Dan Shafry, who first conceived the concept also praised the work done by the Technion team of inventors. “I saw that there was a need to make stretcher carries in the field less challenging for the responders. I came across a company called Etgarim who created a single-wheel wheelchair for people with special needs. I thought that this would be perfect if we could get it on a stretcher. After volunteering with United Hatzalah as an EMT, I began to think of combining my engineering expertise with my EMS background. I spoke to David Krispel, Head of Technology and Development at United Hatzalah and we began building the concept. We then turned to the Technion in order to help us physically engineer and build the prototype.” 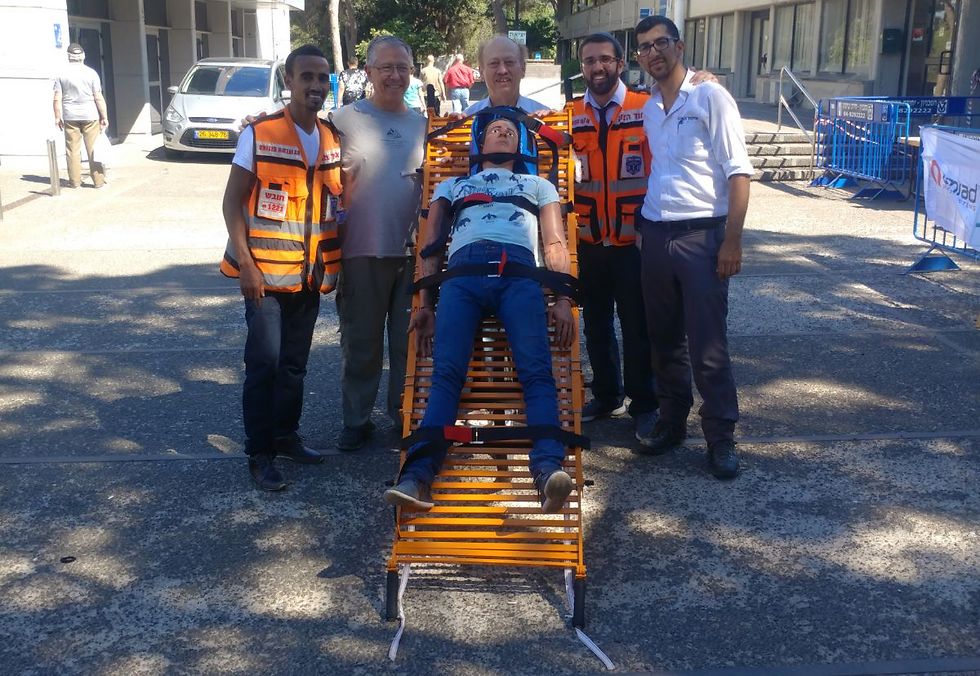 Shafry explained that most accidents on hiking trails in Israel occur on difficult to reach bicycle paths, where the nearest access road to non-bicycles can be kilometers away. “The problem is mainly on cycling paths. Often these paths are narrow and cannot be traversed by four people carrying a stretcher. They are in areas that helicopters and ambulances cannot reach, such as forested areas and rocky, mountainous, terrain including cliffs. This new stretcher is lightweight, folds quickly, is easily constructed in the field with a little practice, and will be a welcome addition to EMS as well as search and rescue teams. It is portable and compact allowing it to easily be stowed on EMS vehicles.”

Michael Adda, one of the Technion students who engineered and built the Adventure Stretcher, said that the team of graduating students were presented with a challenge. “As part of our final year project in the mechanical engineering program we were asked to develop a new technology that would be useful for clients in the field. We were teamed up with United Hatzalah, Israelife, and the Search and Rescue Units. We worked together with Segal Bicycles who provided us with hands-on guidance for everything involving the wheel and the transport aspect of the Adventure Stretcher. Micky oversaw the medical side and explained the need for the stretcher to be a hardened surface enabling it to also be used as a backboard for patients suffering from a spinal cord injury. The main challenges we were presented with was that the stretcher needed to carry a lot of weight, up to 150 kilograms, while being lightweight itself, durable, made from a strong material, be as impervious as possible to shocks and bounces, have a wheel that does not puncture, and be collapsible. It also needed to fit on narrow bicycle paths and we were told could not be wider than 60 cm.” 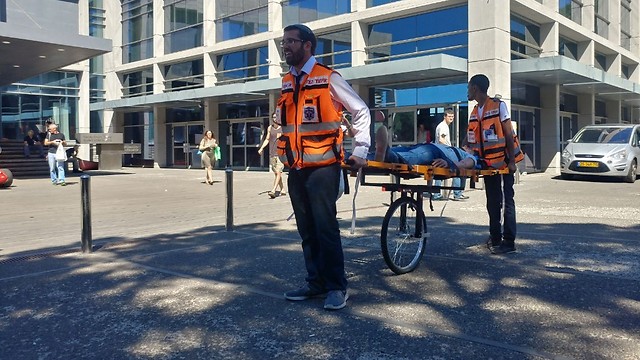 Adda explained how he and his partner Eytanash rose to the challenge. “We made the stretcher out of Magnesium, and it has a telescopic folding system for the middle bars that allow it to collapse into a compact piece for carrying. The bicycle wheel is filled with a lightweight material preventing punctures and has a steel inner ring allowing for more durability and fewer shocks. While we were asked to make sure it could carry a person weighing 150 kilograms, according to our design it can carry up to 300 kilograms. But we haven’t yet found a test-subject that weight willing to try it out.”

Adda added that the testing done on the Adventure Stretcher has been conducted on various types of terrain and areas with stairs. “It is fluid, simple to use, and allows for fast transport of patients over long distances with minimal drain on the responders carrying the patient.”

Shafry added that while the prototype was an incredible success, there are still some tweaks to be made before the product is market ready. “We have a good working prototype. It has succeeded in many ways but there are still improvements to be made. This is the first generation of a new model of the stretcher. For the future models, we will improve the folding capability, cut out more of the weight and continue to improve the strength of the stretcher. For now, it is an excellent beginning and we hope that it will make a huge impact and allow rescue teams to function faster in the field without the need for taking breaks during evacuation scenarios. I believe that it will cut down evacuation time over long distances by half.”

The Adventure Stretcher was displayed on Wednesday at the Technion’s new inventions showcase and received an additional road test immediately thereafter.