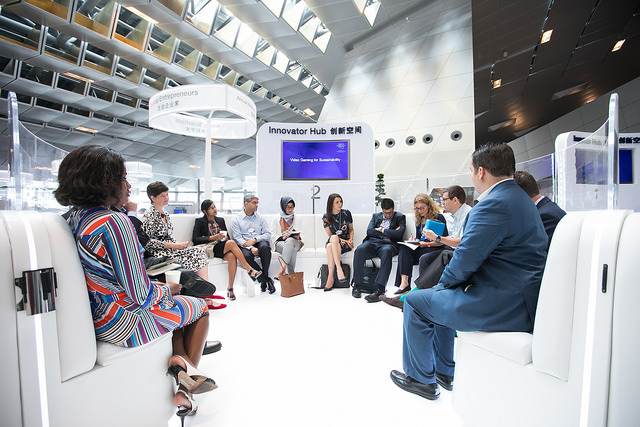 In the past, it was the “big that would eat the small”, but the new champions of growth, those willing to innovate, utilize technological innovation and leapfrog, have shown that dynamic, emerging markets will be the economic powerhouses of the future because, now, it is a case of the “fast eating the slow”.

With half of Fortune 500 companies located in emerging markets, in China and the Asia region, in particular, an expert panel on the final day of the 11th Annual Meeting of the New Champions in Dalian agreed that developing markets willing to adapt will be the leaders of the pack.

“The most stunning statistic I have heard in the last few months is that mobile payments have quadrupled in China in the last year to somewhere around $6 trillion and $8.6 trillion,” observed Catherine Wood, Chief Executive Officer of ARK Investment Management, USA. “What China and developing and emerging markets are doing is leapfrogging some old ways of doing things. It used to be that the big would eat the small; now I see that it is the fast that eats the slow.”

B. G. Srinivas, Executive Director, and Group Managing Director of PCCW, Hong Kong SAR, stressed that “digital lifestyles are no longer reversible” and the countries and companies that will succeed will be those that can customize. “In India, for example, the lack of ATMs means that accessing one is an impossible task for many, but fintech is enabling financial inclusion – access to payment systems for millions of the unbanked.”

Sergey Solonin, Chief Executive Officer of Qiwi, Russian Federation, who in recent years created a new crypto-currency, suggested that the banks that are smart are also catching up, and the relationship between fintech and traditional banking is undergoing an evolutionary shift.

“We thought maybe three years ago that we were one of the disruptors for the banking system in Russia, that it would be a new world for disruptors like us; but lately we don’t see that happening,” he said, “Banks are investing a lot of money into fintech right now,” he explained. “We will see some disruption in the market, but the weight now is more towards collaborative forms.”

In the sphere of aviation, Aireen Omar, Chief Executive Officer of AirAsia, Malaysia, noted that South-East Asia’s young and urban population, coupled with the rapid growth of mobile technology and devices, has led to a significant increase in demand for air travel, and will be fuelled further by innovation. The company has an internal “innovation hub” where the future of air travel is being actively embraced.

“We are pushing for more digital check-in procedures like facial recognition, or biometrics, where the flow would be better in terms of check in. We are looking at this because the volume is going to get bigger and bigger,” she noted. “Pilot-less planes, maybe they can work too: we could start with cargo-only planes or paths with shorter flight hours.”

Speaking of the success of the sharing economy, panelists at the meeting even raised the possibility of the “Uberization” of air travel in the future.

Hu Weiwei, Founder, and President of Beijing Mobike Technology highlighted the willingness of Chinese consumers to adapt to the sharing economy. Her bike-sharing company, which opened just a year ago, provides a 24-hour bike-sharing service to the masses, now spread across 140 cities, including in Japan and the UK. “Everyone has become a node in the information network,” she explained, “Every day we have large numbers of users. We really have achieved leapfrog development and the internet has helped us overcome these various barriers.”