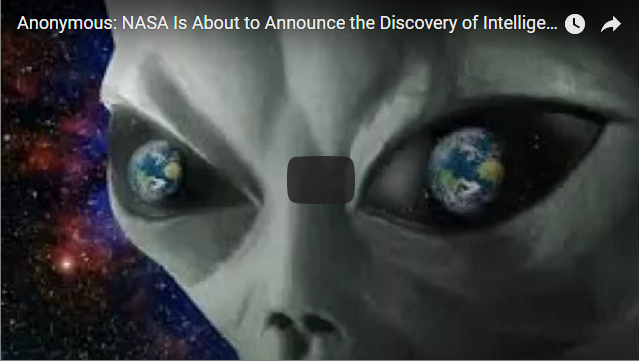 The hackers Anonymous group have published on YouTube a clip which says that head of Nasa Science Mission Directorate Professor Thomas Zurbuchen made the claims at the meeting of the US Science, Space and Technology Committee.

The announcement comes after Nasa’s Kepler space observatory discovered ten planets rocky like the Earth, out of 219 “potential new worlds” found, located in the “Goldilocks zone” which is the exact distance from their Sun. Not too hot or too cold for life to exist.

Professor Zurbuchen posted on Twitter last week: “Wow, 219 potential new planets! @NASAKepler data shows us that most stars are home to at least one planet…Are we alone?”

Wow, 219 potential new planets! @NASAKepler data shows us that most stars are home to at least one planet…Are we alone? https://t.co/IW5PKEU39F

Anonymous claims that Professor Zurbuchen told the meeting: “Our civilisation is on the verge of discovering evidence of alien life in the cosmos.” they added: “Taking into account all of the different activities and missions that are searching for alien life, we are on the verge of making one of the most profound, unprecedented discoveries in history.”

The Kepler space telescope has been hunting for planets since 2009. Kepler found 2,335 planets beyond our solar system, 30 planets are Earth-like planets and able to host life, as we know them.

Susan Thompson, Kepler research scientist said: “This carefully-measured catalog is the foundation for directly answering one of the astronomy’s most compelling questions – how many planets like our Earth are in the galaxy?”

Skeptics have dismissed Anonymous’ statement as speculation. “There is no good reason for NASA  nor the U.S. government the announce the existence of technological civilizations. It is shocking disclosure statement.”

‘Something is going on’: NASA is poised to announce discovery of aliens – #Anonymous Hacking group (VIDEO) https://t.co/ohl88AiHqs pic.twitter.com/Ietw7bgSJi