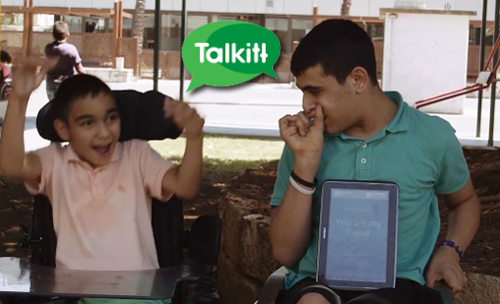 Based in Ramat Gan, Israel, Voiceitt has expanded its staff to 12 employees with 11 in Israel and one in Buffalo, NY. Voiceitt ’s speech technology is currently in beta testing with various hospitals and schools.

The initial version of its Talkitt app is expected to be ready for market early next year and the enhanced Talkitt Pro version is in development for release expected a year later.

The initial version of the Talkitt app allows each user to create a custom library of words and short phrases which Voiceitt ’s speech recognition algorithm instantly translates and outputs into normalized speech.

The enhanced Talkitt Pro app, in development for later release, will cater to specific languages and have English and Hebrew as its first two languages with German, French, and Italian to follow.

Voiceitt was co-founded in 2012 by CEO Danny Weissberg and CTO Stas Tiomkin. Mr. Weissberg was inspired to come up with the idea after his grandmother had a stroke and had serious difficulty in verbal communication.

Realizing the profound impact of losing the ability to communicate naturally, he researched the issue and recognized the huge worldwide potential market for voice assistive technology for those with speech handicaps.

Voiceitt ’s speech technology can also function as an accessibility extension for all the major voice-enabled technologies such as Siri, Alexa, Cortana, etc. which were designed for standard speech input and generally inaccessible for millions of users with non-standard speech, whether because of speech impairments or strong accents.

In the past year, Voiceitt has been awarded:

Voiceitt also has received approximately $500,000 in funding from Israel’s Office of the Chief Scientist (OCS).