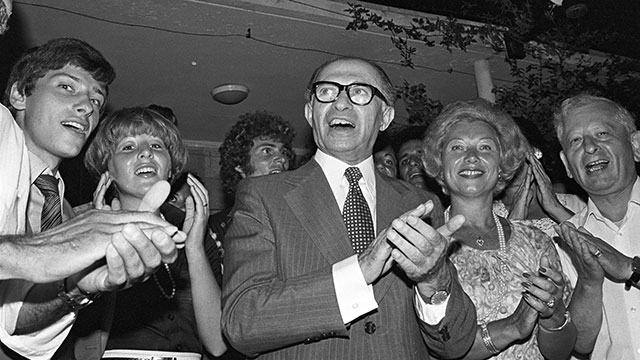 The political upheaval of 1977 took place 40 years ago this week: The right-wing Likud party beat the Ma’arach (the Left-wing Labor Party in its previous configuration). It had been in power since the State of Israel’s establishment, and in fact since as early as the 1930s in the Jewish settlement in the Land of Israel. It was a welcome and inevitable event, because, without a change of government, democracy would have turned from practice into theory.

The setting for the change of throne was perfect: Prime Minister Yitzhak Rabin had resigned following the exposure of an illegal US dollar bank account held by his wife, Leah; senior Mapai official Michael Tzur was sentenced to 15 years in prison; Asher Yadlin, who was about to be appointed governor of the Bank of Israel, was convicted of bribery; and Housing Minister Avraham Ofer committed suicide after being suspected of corruption, although he was not charged.

This feast would not have been possible had it not been for the Yom Kippur War when the Ma’arach lost its grip and immunity. If we reached a situation on Yom Kippur in which “we are losing our third temple,” as Defense Minister Moshe Dayan said desperately, what could happen? We’ll take a chance and try out Menachem Begin for a change.

Up until then, Begin was not considered capable of leading state. He was something between extream right-wing  Rabbi Meir Kahane and a stand-up comedian. The Herut movement was not seen as a movement for quality government, in any sense, or as a corruption eradicator. Its main fundraising foundation, the Tel-Hai Foundation, was exposed in all its disgrace two weeks before the elections: Foreign currency smuggling, theft, involvement in the black and gray markets.

Several days before the elections, a helicopter crashed in a military exercise in the Judean Desert, and 54 officers and fighters were killed. The IDF Spokesperson’s Unit waited two days, until the end of the exercise, before releasing the report. The entire country went into deep mourning upon learning about the disaster. There were no cellphones, WhatsApp or text messages at the time, but there were political urges—as well as audacity. The Likud published a huge ad in the newspapers, saying: “What else has to happen?”

In what kind of style will you run the state, Begin was asked immediately after being elected. “In a Jewish style,” he replied, marking the beginning of the repression of Israeliness for Judaism. He later exempted all yeshiva students from military service. He also forbade El Al to fly on Shabbat. Prof. Yeshayahu Leibowitz said that religion forbids Jew to fly, not planes. In general, Leibowitz said, religion should be in constant opposition to the government. But Begin, unlike his predecessors who brought the religious parties into the coalition, brought religion into the coalition.

Begin made peace with Egypt. His historical act, a glorious page in our history, set both a price and a precedent: A return to the 1967 borders. The Likud’s finest sons grew up and realized that the songs they had sung and their party’s platform might be suitable for television panels and storytelling events, but not for reality. They changed their views and their taste: Ezer Weizman, Ariel Sharon, Ehud Olmert, David Levy, Roni Milo, Dan Meridor, Tzipi Livni, Ronnie Bar-On, Meir Sheetrit, Michael Eitan, Ze’ev Boim, Jacob Edery, Moshe Kahlon and others.

The Likud has been in power for 40 years, apart for a short three-year break when the Rabin-led Labor Party won the elections. The Kadima party was the Likud’s own flesh and blood. Ehud Barak was prime minister for a little over a year, but in light of his eccentric performance and the fact that the Labor Party had shrunk—it doesn’t really count.

All Likud leaders—in fact, all prime ministers excluding Benjamin Netanyahu—were guided by two principles: One, the state is more important than me and my family members; and two, nationality comes before the party—what is known today as the base. Begin raising the supremacy of law and order to a level of sacredness. Yitzhak Shamir, who opposed the peace agreement with Egypt wholeheartedly, abstained in the vote because as Knesset speaker it would have been inappropriate for him to vote against it. Several years later, he favored a coalition with the Labor Party over a coalition with the right-wing base.

Throughout the generations, Israel has been governed by centrist and right-wing parties. Labor was centrist, and the Likud is right-wing. The Left has never been in power. We have never had a leftist government. Neither have we had a Sephardic prime minister.