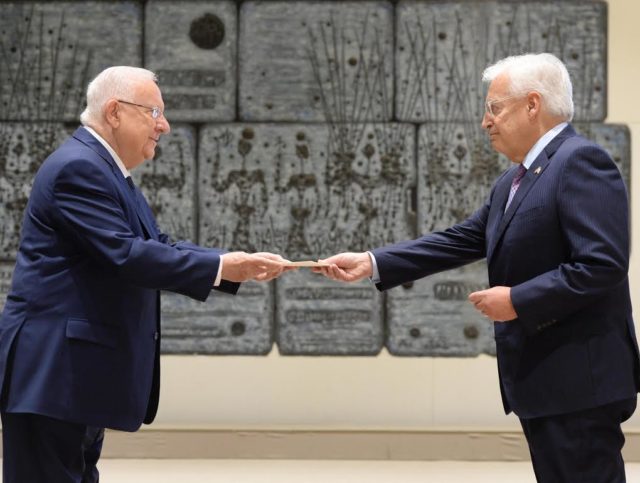 In a ceremony at the President’s Residence in Jerusalem Tuesday, David Friedman, the new US ambassador to Israel, presented his diplomatic credentials to President Reuven Rivlin.

Ambassador Friedman arrived at the President’s Residence accompanied by his wife Tammy, and daughter Talia. Both men gave brief statements to the media. Friedman is pledging to do all within his power to take the Israel-US relationship to “new heights.” For his part, Rivlin told Friedman that the countries of the world should recognize Jerusalem as Israel’s capital.

President Rivlin continued, “We are looking forward to welcoming President Trump in less than a week. His visit is vital. It is a sign of the unbreakable bond between Israel and the USA. We look forward to working with the new Administration to find new ways and to think of new ideas, of how to move forward and build trust between Israelis and Palestinians.”

The President went on, “Next week, we will celebrate 50 years since Jerusalem was united, and the Jewish people were able to once again pray at the Western Wall. But Jewish Jerusalem is not 50 years old. Since the days of King David, this city has been our capital. It is time for the whole world to recognize Jerusalem as the official capital of the State of Israel. De Facto, not just De Jure.”

The President finalized by wishing Ambassador Friedman much success in his new role and said he was looking forward to working together with him to further strengthen the relationship between the two countries.

US Ambassador Friedman thanked the President for his warm welcome and for receiving his credentials. He told the President that, “As a seventh generation Jerusalemite, you continue the connection to Jerusalem that began with King David some 3000 years ago.”

He continued, “Serving the US as its Ambassador to the State of Israel, is the greatest honor of my life, and I pledge to you to do all that I can to strengthen and enhance the relations between our two great nations – that you accurately described as unbreakable and, I would add, without limits.”

Friedman stressed, “I am so grateful to President Trump for giving me the opportunity, for having confidence in my abilities, and most importantly for sending me off this past week with the unequivocal and unambiguous mandate to support the State of Israel in every way, and in all ways. As you know, the President has chosen Israel as the site for his first international visit this coming week. His love for and commitment to the State of Israel is rock-solid and enjoys his highest priority.”

The US Ambassador added “I look forward to working with you and the people of Israel to do even more to bring together the United States and Israel — in every field, from culture to education, life sciences, high technology, commerce, trade, and of course military and strategic cooperation and so many other things.”

After a brief meeting, the new Ambassador then signed the official guest book, and was joined by the President at the entrance to the residence for the Israeli national anthem, ‘Hatikva’.