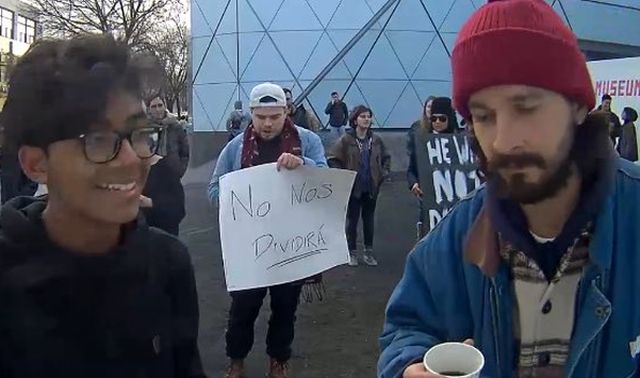 Actor and artist Shia LaBeouf has been forced to take down his “He Will Not Divide Us” live stream protesting the presidency of Donald Trump once again – this time it’s by his choice, after shots were fired.

It is not clear if the shots were fired at the location of the exhibit or just in the general area.

“We have taken the stream down after shots were reported in the area. The safety of everybody participating in our project is paramount,” Shia LaBeouf tweeted Thursday morning.

We have taken the stream down after shots were reported in the area. The safety of everybody participating in our project is paramount.

Shia LaBeouf and fellow artists Rönkkö & Turner relaunched the project at the El Rey Theater in Albuquerque, New Mexico after it was shut down by the Museum of the Moving Image in Queens earlier this month.

The museum claimed that the “He Will Not Divide Us” was shut down on Feb. 10 after it created an ongoing public safety hazard.

The protest then relocated to Albuquerque New Mexico’s El Rey Theater on Saturday. They manged to  where it lasted less than a week before being vandalized with red spray paint.

On Tuesday, the camera, which provides a live stream of the event to the entire internet, was sprayed in paints and coverd for a few hours before it was cleaned off.

In this article:Finance, Shia LaBeouf