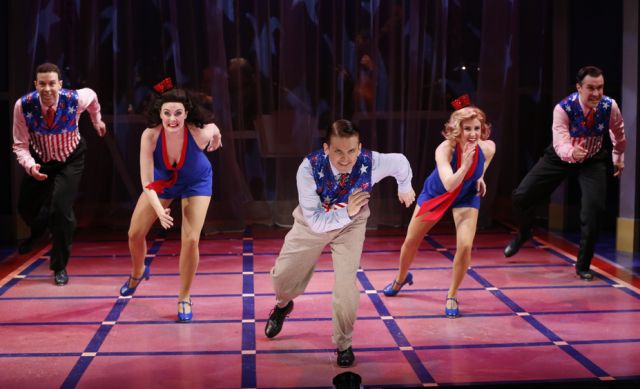 I don’t know one person that wasn’t humming to oneself the Yankee Doodle Dandy music of Cagney’s films after seeing them again and again. This is the experience that one takes away after watching Cagney on Broadway.

On a modest-sized stage at Off-Broadway’s Westside Theater—an intimate and very welcoming old fashion place, one gets an unforgettable moving theater experience.

Yankee Doodle Dandy is a 1942 American biographical musical film about George M. Cohan, known as “The Man Who Owned Broadway”.
Cagney, or as many like to call him America’s Favorite tough guy! reveals the ups and down’s in Cagney’s personal life and at the same time the hard times in America. The play is built with flashbacks and flash forwards. Where Jack Warner of Warner Brothers brings us into the secrets of Hollywood film making with so much vibrancy that we’re completely captivated by him. The show is acted by 6 fantastic performers who take on themselves several roles of divers characters. Probably because of low budget but these facts only add on to the admiration we feel towards each and every one of them.

The show’s star and co-creator, Robert Creighton, brings Cagney alive. The minute he taps his shoes on that small stage the place looks much bigger and you feel like dancing with him. But apparently life wasn’t easy for this five plus foot  Irish kid on the streets of New York City. He had to fight hard for every dollar he earned. What many didn’t know is that he fought hard for his fellow workers too. He dedicated himself to fairness and justice  so much that he was accused for encouraging the formation of an actors union. Later on Senator McCarthy accused James Cagney of being  a communist. In spite of the fact that he was known as a huge American patriot .

James Cagney, as the play reveals, wasn’t just a larger-than-life actor, he was an amazing human being that didn’t compromise his integrity. Him moving from New York City to Hollywood to work with Jack Warner wasn’t easy. He left behind his mom and brother living under poor conditions. But his Mother insisted that he’ll take this amazing opportunity to work in Hollywood. Only to return some years later to form his own company since he felt being used and not compensated enough by the Hollywood biggest producer Jack Warner.

So many memorable films being brought up that it makes you feel like seeing them all over again. The Public Enemy, The G Men and White Heat. Songs like ” Give my regards to Broadway”,”Grand Old Flag”…. But above all his song and dance in Yankee Doodle Dandy  that earned him the Academy Award. Throughout the show there is this anticipation to hear and see that amazing performance that all of us remember with a warm heart. At the end one can’t sit anymore and all jump to their feet in a standing ovation !