Between 2000 and 2015, 33,321 Israelis acquired German citizenship, with 4.79 percent renouncing their Israeli citizenship in the process, according to data published by the German Bundestag in response to a question submitted by the Greens.

The figures are based on data from Germany’s Central Register of Foreign Nationals (Ausländerzentralregister, or AZR) and appear in a telegram that was sent by the Israeli Embassy in Germany to the Ministry of Foreign Affairs in Jerusalem.

The peak year of Israelis acquiring German citizenship during that period was 2006, when 4,313 succeeded in the process, with 97 percent being required to renounce their Israeli citizenship. As of November 30, 2016, 13,289 Israelis reside in Germany, according to authorities there.

The Greens’ question was submitted by parliamentarian Volker Beck, President of the Bundestag’s German-Israeli Parliamentary Friendship Group. The group has been working recently to exempt Israeli citizens from the requirement to renounce their other citizenship as a condition to their becoming Germans. 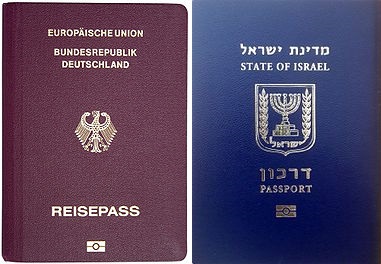 Many Israelis who have lived in the Federal Republic for years or who are married to German citizens have refrained from taking advantage of their right to naturalize due to German law requiring that they renounce other citizenships that they hold.

Those who are exempt from the requirement are those who obtain German citizenship by virtue of their being descendants of former Germans who were denaturalized under the Nazi Regime. Indeed, according to the German report, 95 percent (31,722) of the Israelis who became Germans during the examined period were descendants of Germans whose citizenship had been stripped by the Reich Citizenship Law and thus maintained their Israeli citizenship.

In addition to descendants of the Nazis’ victims, Germany also permits dual citizenship for citizens of European Union member states, as well as Switzerland. Beck is seeking to have Israel added to that list, which is what led to his question to the Bundestag. However, the German government replied that it does not intend to modify the citizenship laws.

In an interview with the German-Israeli Spitz Hebrew magazine, Beck explained that he found it senseless that senior politicians in his country frequently speak of the “special relationship” and “deep friendship” with Israel but refuse to support permitting dual citizenship to Israelis. (The Greens officially oppose the ban on dual citizenship and have sought to have this prohibition overturned.)

Beck told Spitz that he became aware of the problem when he heard again and again from Israelis who live in Germany for years, some of them even involved in politics, who elect not to naturalize and thus are unable to vote in elections because they don’t want to renounce their citizenship with the Jewish state.

Beck said that he completely understood the difficulty, be it founded in practicality or sentimentality.

Israeli children (as with all other foreign children in Germany) who receive German citizenship at birth from a German parent and Israeli from the other are not required to choose between the citizenships and are allowed to keep them both.