Eva Zifkina, only 21, has been through enough life experiences to last the rest of her days. She was born in Ukraine to a Christian family, discovered she was the granddaughter of Jewish Holocaust survivors and consequently set off on a journey of self discovery that brought her to immigrate to Israel and to enlistment in the IDF as a lone soldier.

Her parents understand, but they prefer to continue their lives as Christians. Eva, on the other hand, is preparing to go through a halachic conversion course to Judaism in the army. Until then, she is adapting to her new life as an Israeli soldier. On Thursday, she was one of 1,500 soldiers without family in the country who have come from all over the world to elnist in the IDF, who decided to enjoy a special Yom Siddurim (the name translates as “Errands Day”) at Beit Hachayal in Tel Aviv. The event was hosted by Nefesh B’Nefesh and Friends of the IDF (FIDF) in the US and Panama in conjunction with the IDF”s Manpower Directorate.

Nefesh B’Nefesh explains Yom Siddurim as “the days allocated to lone soldiers to leave base and take care of their personal business, be it going to the bank, getting new glasses, or working through the process of converting their driver’s licenses.”

At the special annual Yom Siddurim, representatives from government ministries and authorities, academic institutions, financial bodies and others come to provide information, advice and help sort out personal matters that the soldiers were unable to handle from their bases. 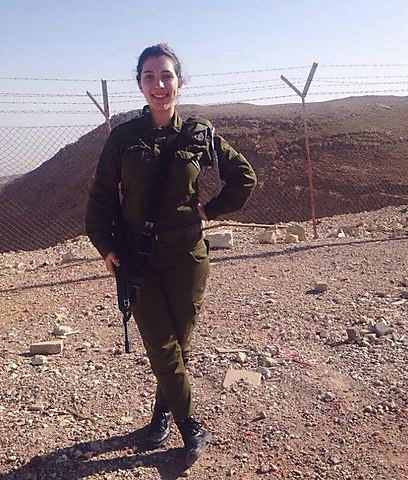 “I definitely want to become familiar with Judaism because it’s a part of me, and it’s important to me,” Zifkina said. Her story began in the city of Kharkiv in Eastern Ukraine, where she was born.

Her grandfather, Fyodor Zidkin, stunned his son and daughter-in-law when he told them that he was Jewish. During the Second World War, when he was only 12, he disguised himself as a Muslim rather than as a Christian due to his circumcision. He thus survived the war while the rest of his family perished, and he chose to continue his life as a Christian.

He refused to reveal his Jewish name or the historical roots of his family, and not too long after his revelation, he died. Eva’s parents decided to continue their lives as Christians, but they wanted their young daughter to know the Jewish tradition, so they sent her to a Jewish school.

“I finished high school at 16, and I starting studying pharmacy at an academy,” Zifkina explained. “In my free time, I tried to find information about my Jewish roots. I contacted my grandfather’s friends and people who worked with him, but I didn’t manage to get any information. After a year, I stopped my studies because I wanted to focus on my search and immigrate to Israel.”

But here her problems began. “I was told that because I didn’t have proof that my grandfather was Jewish, the only way to immigrate to Israel would be to convert, so I started a conversion course. Later, I found my grandmother and grandfather’s marriage certificate, and they married in a synagogue. This was proof that my grandfather was Jewish, and I was found to be eligible to immigrate to Israel.”

‘I live in a Jewish state, and it’s important to me to connect to Judaism’
Even though her parents and sister chose to live their lives in Ukraine, Zifkina immigrated to Israel with the Garin Tzabar program. This placed Zifkina in an immigrant absorption center in Ra’anana with other lone soldiers.

She is scheduled to complete her mandatory service in a year, but she nevertheless decided to attend the Yom Siddurim event to look into the possibility of studying psychology of sociology after her discharge. She wanted to find out what rights she had as a new immigrant and also to see if she could get a driver’s license.

“Even though I managed to immigrate to Israel, according to halacha, I’m not Jewish, and it’s very important to me to go through the conversion process after discovering that there’s a Nativ course that facilitates conversion during military service,” she said.

Asked if she knows that passing the conversion course requires a religious lifestyle, Zifkina replied, “It really isn’t easy because I didn’t grow up in those conditions. But I live in a Jewish state, and it’s important to me to connect to Judaism. It interests me, and it may be that during the course, it will influence me, and I’ll decide to be religious.”