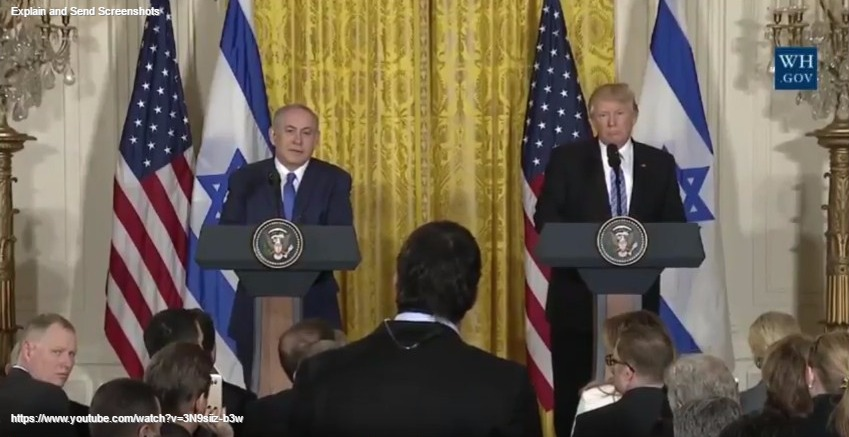 President Donald Trump on Wednesday urged Israeli Prime Minister Benjamin Netanyahu to curb settlement activity but avoided any explicit endorsement of a two-state solution to the Israeli-Palestinian conflict, a longstanding bedrock of US Middle East policy.

Trump opened his joint news conference with a vow to encourage a peace agreement between Israel and the Palestinians. But the president said the two parties themselves “must directly negotiate such an agreement.”
Netanyahu added, “both sides.”

Netanyahu said there is “no greater supporter of the Jewish people and the Jewish state than President Donald Trump.” The prime minister was addressing a question from Israeli media about fears the administration “is playing with xenophobia and maybe racist tones.”

The arrival at the White House

Netanyahu said that he’s known Trump, members of Trump’s team and his family for many years. That includes Trump’s son-in-law and senior adviser Jared Kushner, whom Netanyahu has known since Kushner was young. Netanyahu said he thinks any insinuation otherwise should be put “to rest.”

Setting a chummy tone for the meeting, Trump greeted Netanyahu on a red carpet rolled out to the White House driveway. The two leaders smiled, shook hands and chatted amiably before heading inside the executive mansion, accompanied by first lady Melania Trump and Netanyahu’s wife Sara.

Trump reaffirmed the United States’ “unbreakable bond” between the two countries. He called Israel a symbol of resilience. He said Israel faces enormous security challenges and is calling the Iran nuclear deal negotiated under former President Barack Obama “one of the worst deals I’ve ever seen.”

“I’d like to see you pull back on settlements for a little bit,” Trump told Netanyahu. The Israeli leader later insisted that Jewish settlements were “not the core of the conflict” and made no commitment to reduce settlement building.

The American leader broke with his predecessors on the idea of a two-state agreement. While such an accord may have once appeared to be the “easier of the two” options, Trump said he’d be open to alternatives if the two sides propose something better.

Trump echoed Netanyahu’s calls for Palestinians to recognize Israel as a Jewish state – something they have refused to do – and to halt incitement against Israelis.

But even as Trump promised to pursue peace between the two sides – who have had no substantive peace talks since 2014 – he offered no new prescriptions for unblocking the peace process or achieving a deal that has eluded so many of his predecessors.

“I can live with either one. I thought for a while it looked like the two-state, looked like it may be the easier of the two, but honestly if Bibi and if the Palestinians if Israel and the Palestinians are happy, I’m happy with the one they like the best,” Trump said, referring to Netanyahu by his nickname.

Netanyahu said that he wanted to focus on “substance” and not “labels,” when asked about support for a two-state solution for peace between Israelis and Palestinians.

“Rather than deal with labels, I want to deal with substance,” Netanyahu said.

“There are two prerequisites for peace. First the Palestinians must recognize the Jewish state … Second, in any peace agreement, Israel must retain the overriding security control over the entire area west of the Jordan River,” he said.

Trump also said that he’d like to see the US Embassy in Israel moved from Tel Aviv to Jerusalem, but noted that “we’re looking at it with great care.”
A retreat from U.S. backing for a two-state solution would upend decades of U.S. policy embraced by Republican and Democratic administrations and a principle considered the core of international peace efforts.

Trump also took a moment to call out and praise Sara Netanyahu, asking her to stand to be recognized. He also referenced his daughter, Ivanka, who was in attendance, when addressing a question on rising anti-Semitism in the United States. He said that he was going to do everything in his power to stop long-simmering racism

Palestinians reacted with alarm to the possibility that Washington might ditch its support for an independent Palestinian nation.

“If the Trump administration rejects this policy it would be destroying the chances for peace and undermining American interests, standing and credibility abroad,” Hanan Ashrawi, a senior member of the Palestine Liberation Organization, said in response to the US official’s remarks.

“Accommodating the most extreme and irresponsible elements in Israel and in the White House is no way to make responsible foreign policy,” she said in a statement.

Husam Zomlot, strategic adviser to Palestinian President Mahmoud Abbas, said the Palestinians had not received any official indication of a change in the US stance.

For Netanyahu, the talks with Trump are an opportunity to reset ties after a frequently combative relationship with Democrat Barack Obama, Trump’s predecessor. After speaking to reporters, the two leaders were due to hold talks in the Oval Office followed by a working lunch.

The prime minister, under investigation at home over allegations of abuse of office, spent much of Tuesday huddled with advisers in Washington preparing for the talks. Officials said they wanted no gaps to emerge between U.S. and Israeli thinking during the scheduled two-hour Oval Office meeting.

Trump, who has been in office less than four weeks and has already been immersed in problems including the forced resignation of his national security adviser earlier this week, brings with him an unpredictability that Netanyahu’s staff hope will not impinge on the discussions.

The two leaders, who seemed to strike up an emerging “bromance” in social media exchanges since the election, sought to demonstrate good personal chemistry face-to-face as well, both sporting smiles and exchanging asides.

Meetings with Obama were at best cordial and businesslike, at worst tense and awkward. In one Oval Office encounter in 2011, Obama grimaced as Netanyahu lectured him in front of the cameras on the suffering of the Jewish people through the ages.
Ynet News & news agencies