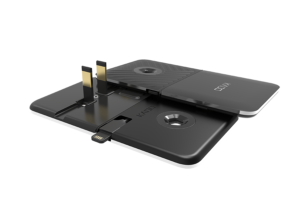 Israeli startup Kado , which is developing a new ultra-thin charging technology, has raised $1.2 million to help it complete development of the world’s thinnest wall charger. AltaIR Capital participated in the seed round.

In the coming weeks, the company intends to launch a Series A financing round in order to prepare for commercial launch of its products in 2017.

Kado has unveiled two ultra-thin chargers: one for smartphones and tablets, and one for laptops, which is the first ever fordable charger.

Kado’s entrepreneurs have developed a power conversion technology with high levels of power density and utilization that sets a new standard of compact and extremely thin chargers and transformers, suited for today’s mobile lifestyle.

Kado Wallet, the company’s ultra-thin charger for smartphones, is just 5mm thin (the thickness of 3 credit cards), and can be carried in a wallet or a purse. It also includes a uniquely designed cable mechanism.

The 21-gram Kado Wallet supplies up to 10 Watts and can also charge other mobile devices, such as tablets, cameras, wireless speakers and headphones.

Kado Sleeve for laptops, the world’s first ever foldable charger, weighs only 97 grams and provides up to 70 Watts. It has two USB ports for the simultaneous charging of a laptop and a smaller device, such as a smartphone or a tablet. Kado is developing additional products and peripherals, such as dedicated cables, covers, and other modular units in order to complete its unique charging experience.

Kado’s technology is relevant for a wide range of end markets beyond wall chargers, in industries such as consumer electronics, IoT, electric outlets, lighting, automotive, defense and medical devices. The company has already filed patent applications for the technology.

Founded Kado in May 2016 by co-CEO Itay Hasid, Daniel Assis, both in the end of their 20s, and other partners. Kado’s R&D center is located in Lod, Israel, with 11 employees, including electronics, power, and mechanical engineers.

Last year, Hasid and Assis, already chalked up a successful exit of their previous startup, Mobeego.

Mobeego, developed and marketed a disposable charger for mobile devices, selling half a million units in 14 countries in three months. Mobeego, which launched its product in late 2015, was sold to Life Clips Inc., an American public company, for $6 million in June 2016, six months following the launch.

As part of the company’s financing and marketing plan, Kado announced that it would soon launch a crowdfunding campaign on one of the web’s popular platforms. The campaign will be followed by the launch of the company’s products, first in the U.S. market, and then in additional global markets such as Japan and Europe.

Kado’s technology allows the company to establish a business model with two revenue sources: the first is a B2B model of income from collaborations with multinational manufacturers of mobile, computer, and digital product brands; the second is a B2C model of direct sales of the company’s products to consumers worldwide. According to data in the company’s possession, smartphone users worldwide own an average of two chargers per person, which indicates the market’s potential for Kado products.