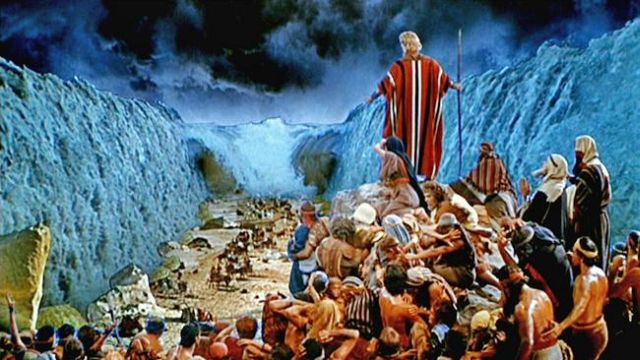 In this week’s Parsha we learn about Hashem taking Bnei Yisrael out of Mitzrayim.

It came to pass when Pharaoh let the people go, that God did not lead them [by] way of the land of the Philistines for it was near, because God said, Lest the people reconsider when they see war and return to Egypt

כי קרוב הוא: ונוח לשוב באותו הדרך למצרים. ומדרשי אגדה יש הרבה:
for it was near: and it was easy to return by that road to Egypt. There are also many aggadic midrashim [regarding this].

when they see war: For instance, the war of “And the Amalekites and the Canaanites descended, etc.” (Num. 14:45). If they had gone on a direct route, they would have returned. Now, if when He led them around in a circuitous route, they said, “Let us appoint a leader and return to Egypt” (Num. 14:4), how much more [would they have planned to do this] if He had led them on a direct route? [According to the sequence of the verse, the headings appear to be transposed. See Mizrachi, Gur Aryeh, and Minchath Yehudah for a correct solution of this problem.]

Lest…reconsider: They will have [second] thoughts about [the fact] that they left Egypt and they will think about returning.

Hashem took them in the way which was not the simple and short way so that they do not go back.
Rabbi Itamar of Konsekevulei, one of the great disciples of the Chozeh of Lublin and the Magid of Mezritch, explains that Hashem bring us through challenges and difficulties in order to fortify our connection with him. He explains that when we overcome the challenges we are really reaching deep inside ourselves and healing and aligning those parts of us which are are not in harmony with our higher self the our soul’s intentions of completely devoting ourselves to Hashem and His will. We heal those points of resistance and misalignment and this fortifies our connection to Hashem.

At this point we become trustworthy that we will not run away from serving Hashem as soon as it gets hard and so this is when Hashem reveals to us the true secrets of the Torah and the universe. We may merit many ‘presents’ beforehand but it is only once we overcome the challenges and become truly trustworthy that we are entrusted with the real secrets, the real light, the real divine bliss and eternal pleasure.

This, he explains, is learned in the words

It came to pass when Pharaoh let the people go

This means that when the Yetzer Hara, who is represented by Paroh, is sent away from the people. (This is an alternate translation from the simple meaning of the words)
Meaning that the people accept upon themselves Hashem’s will with complete acceptance, love, and contentment. It means that they have resolved to completely rid themselves of the evil inclination and all wrongful traits, behaviors, belief systems, thought patterns, and attitudes.

Rebbe Itamar explains to read Plishtim as Peleshet Yam. Peleshet means to penetrate and go through, and Yam means the sea which alludes to the “Yam Hachochma”-the sea of wisdom, a reference to the consciousness of divine wisdom- חכמה עילאה.

With this in mind, the Pasuk is telling us that Hashem initially withholds from them the revelation of the deepest secrets of the divine consciousness of infinite life and inspiration. He does not lead through the “Yam Hachochma”.

כִּי קָרוֹב הוּא
for it was near

This means that he did not sufficiently labor to purify himself and make sure he is completely devoted. He did not yet sufficiently prove that no matter what he will stay devoted to Hashem and that he will not run away as soon as there’s a challenge.

This running away as soon as there’s a challenge can also refer to when someone makes a mistake and sins and does something inappropriate according to the Torah. At this point the challenge is whether they will stay true to Hashem and repent with honest supplication to the Almighty, or will they run away from this challenge and just give up.

This implies that Hashem will instead lead them through challenges and tribulations, which are referred to here as ‘the desert’, a desolate and destitute place.

This implies that at this pint the “Yam”-the sea of divine inspiration and eternal life and infinite wisdom is still closed off and concealed until “Soof”-the “end”, once he has sufficiently aligned himself with his highest inner self and cleaned himself from all the resistance.

Rebbe Nachman explains in his Sefer HaMidot in the chapter on ‘Teshuvah’ that when someone returns to Hashem he is not given the secrets and the revelations of the highest most inner pleasantness of the Torah and serving Hashem until he proves himself. Hashem says to him, “I know that you wish to serve me mut what is the guarantee? Maybe you will leave tomorrow and go back to your old ways and it is therefore unbefitting for me to instantly reveal to you the great secrets. First develop a true commitment by implementing consistently and then I will reveal to you….”

We can all learn from here the power of committing with absolute devotion and that this is expressed through serving Hashem consistently. We learn here about the importance of even a small step in the right direction but with a complete commitment which is expressed consistently.

May we merit completely devoting ourselves by dissolving all resistance, even the hard to find-almost undetectable resistance, so that we are completely trustworthy to be the keepers of the highest and deepest consciousness of eternal bliss and divine wisdom.

May we merit through the this a consistent and true elevation to the Yam Hachochma and the final redemption which comes about through this revelation, with the revelation of Mashiach speedily in our days Amen!