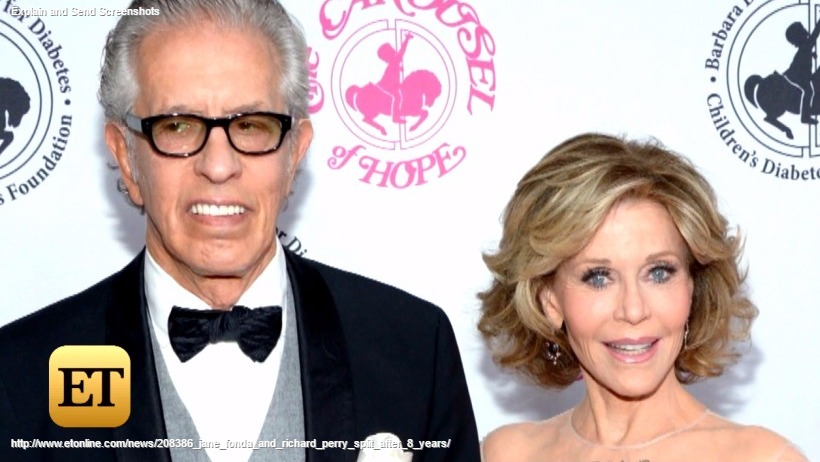 Perry, a legendary music producer whose hits include Carly Simon’s “You’re So Vain”, Barbra Streisand, Rod Stewart, Diana Ross and a slew of catchy pop ditties from the trio The Pointer Sisters.

“I hate to say the romantic relationship is over.”Perry told E online. “We’re definitely extremely good friends. We do things together. We care about each other a great deal and as far as romantic relationships, that’s temporarily been put on the back burner because she, as you probably know, has rededicated herself to activism. We definitely have a great deal of love for each other.”

The couple put their Beverly Hills mansion on the market for $13 million last week. Perry purchased the 7,102-square-foot four bedroom and 6.5 bathroom residence in June 2012 for $7.3 million. The house includes a glass elevator, bamboo floors, a state-of-the-art kitchen, home gym and a garden.

Richard Perry was previously married to actress Rebecca Broussard. The Oscar winner (“Klute,” “Coming Home”) and co-starring in the Netflix series “Grace and Frankie,” Jane Fonda, was married three times — to Roger Vadim, Tom Hayden and Ted Turner, with whom her finalizing divorce in 2012

In an interview with The Sun, Jane Fonda said: “At 74, I’ve never had such a fulfilling sex life.The only thing I have never known is true intimacy with a man.”
Fonda added, “I absolutely want to discover that before dying. It has happened with Richard, I feel totally secure with him. Often, when we make love, I see him as he was 30 years ago.”
In this article:Finance