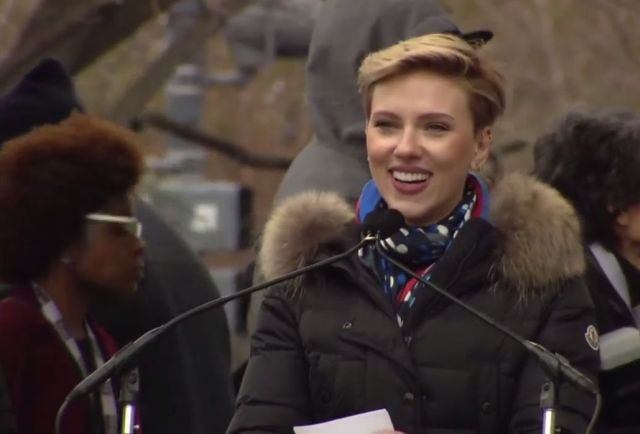 The Women’s March on Washington was held yesterday, the day after Donald Trump was inaugurated as the 45th President of the United States. Among the notable speakers at the event were many Jewish women including Scarlett Johansson and Gloria Steinem.

Entertainment Weekly shared Scarlett Johansson’s words at the Women’s March which included, “President Trump, I did not vote for you. That said, I respect that you are our President-elect and I want to be able to support you. First, I ask that you support me, support my sister, support my mother, support my best friend and all of our girlfriends, support the men and women here today that are anxiously awaiting to see how your next moves may drastically affect their lives.”

Scarlett Johansson to Trump: "I want to be able to support you, but first, I ask that you support me" and all women https://t.co/vBbG13GC3C

“Support my daughter,” she also told the people gathered at the Women’s March, “who may actually — as a result of the appointments you have made — grow up in a country that is moving backwards, not forwards, and who potentially may not have the right to make choices for her body and her future that your daughter Ivanka has been privileged to have.”

Actress America Ferrera speaks at the #WomensMarch in Washington, DC: "Our rights have all been under attack" https://t.co/fVsrXa6oaj

Gloria Steinem also addressed the Women’s March protesters. She had a few choice words for both the new President and his cabinet picks. “Trump and his handlers have found a fox for every chicken coop in Washington,” she said. “And a Twitter finger shouldn’t become a trigger finger.”

On Donald Trump’s inaugural address, Gloria Steinem said, “grandiosity, impulsivity, hypersensitivity and an apparent inability to distinguish between fantasy and reality was on full display in his inaugural address yesterday.”

“[Donald Trump] also said he was with the people, that indeed he was the people,” Steinem also told the Women’s March. “To paraphrase a famous quote, I have to say I have met the people, and you are not them. We are the people. Just this march in Washington today required 1,000 more buses than the entire inauguration!”

“Pressing send does not allow us to empathize with other people. If you hold a baby you’re flooded with empathy. If you see somebody in an accident you want to help them. I love books, but [empathy] doesn’t happen from a book. It doesn’t happen from a screen. It only happens when we’re together.”

As for the Women’s March itself, Steinem commented on the youth in attendance telling those gathered, “I think I just had to wait for some of my friends to be born.”

The Women’s March was held both in Washington and in cities across America to protest the new President because its organizers feel that President Trump is insensitive to women’s issues and are concerned about the future of Planned Parenthood and abortion rights.