A new treatment for Cystic Fibrosis may have been developed by researchers in New Zealand. The disease affects a disproportionate number of Ashkenazic Jews.

A study titled “Biological Function of a Polysaccharide Degrading Enzyme in the Periplasm,” was published in Scientific Reports.

The research focused on a glue-like substance, called biofilm, which allows bacteria to stick to materials and form a protective layer. Biofilms are found everywhere, like the plaque on your teeth, but while most are harmless, some can be deadly. And the scientists identified a protein that could help fight serious infections in the elderly, cancer, HIV infections as well cystic fibrosis patients.

According to the Jewish Genetic Diseases Consortium, 1 in 24 Jews suffer from Cystic Fibrosis and the European Ashkenazic Jews are more likely to be affected than Sephardic Jews of Middle Eastern origin. Symptoms of the disease include include frequent lung infections, coughing or wheezing, fat malabsorption, poor growth, fatigue and infertility in males and Cystic Fibrosis is caused by a genetic mutation.

Professor Bernd Rehm of Massey’s Institute of Fundamental Sciences led the study and says that they have found a way to strip the protective layer away so the bacteria can be attacked. “Before this discovery the bacteria was effectively able to take hold of patients with weak immune systems and doctors could do little but sit by and watch it attack the body and spread,” stated Professor Rehm.

“The bacteria is abundant in our environment and remains relatively harmless to healthy individuals, until carried to the vulnerable, for instance into hospitals, who cannot keep it out. It is so hard to fight, because it is remarkably resistant against a broad range of antibiotics,” he added. 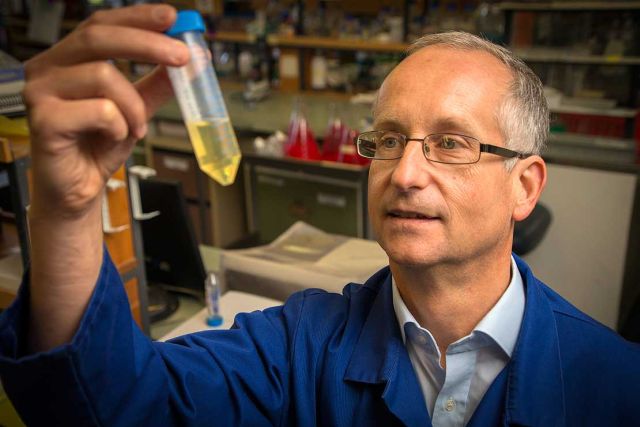 The breakthrough comes with the identification of a protein that may be able to stop the biofilm latching on to tissues and causing an infection, but also may help the body stop the bacteria spreading to other parts of the body and causing a chronic infection.

“The protein influences the chemical composition of the bacteria, and by hijacking that protein we can stop it from taking a hold or spreading,” Professor Rehm says.

Wow that sure is a mouthful. In short, this has something to do with treating the infections related to Cystic Fibrosis.