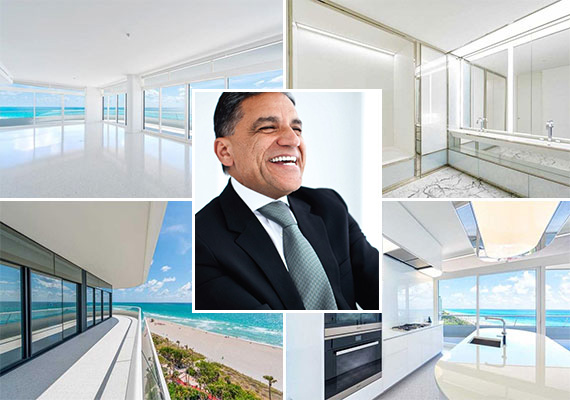 Black had paid for the house $16.5 million in September 2015. The Faena House, is a 18-story unit. The unfurnished five-bedroom, six-and-a-half bathroom condo have white Venetian terrazzo flooring and Thassos marble countertops. According to Forbes Black’s net worth $5.3 billion, ranking him the 105th richest man in the U.S.

Joseph Moinian was born in Teheran to an Iranian Jewish family. He started his career in 1982, when he founded the ladies’ apparel company Billy Jack for Her.

Eight years later,  in 1990, he founded the Moinian Group to develop, own and operate properties including office, hotel, retail, condos and rental apartments. Among the firm’s projects is a Zaha Hadid-designed condominium project in Chelsea that Hadid had designed before her death. Currently Moinian is working to develop a new 66-story, 1, 700, 000 square feet (160, 000 m2) building named 3 Hudson Boulevard in the Hudson Yards Redevelopment Project.

According to the company website Moinian Group has a 20 million-square-foot portfolio in New York, Chicago, Dallas and Los Angeles.

Faena House is an ultra-luxe tower developed by Alan Faena.

Alan Faena  was born in Argentina to Syrian Jewish textile manufacturer. He start his career as fashion designer at the age of 19. After he sold his textile company he partnered with Len Blavatnik, Philippe Starck to build residential condominium which become the most valuable real estate in Buenos Aires.

The Faena House is part of a $1 billion Miami Beach Faena District project to develop a six block waterfront property.