McDonald’s Corp has agreed to sell the bulk of its China and Hong Kong business to state-backed conglomerate CITIC and Carlyle Group lead by David Rubenstein for up to $2.1 billion.

The 20-year partnership deal will be settled by cash and by new shares in a new company issued to McDonald’s. After completion of the transaction, CITIC and CITIC Capital will have a controlling stake of 52%, while Carlyle and McDonald’s will have interests of 28% and 20%, respectively.

The U.S. fast food chain has more than 2, 400 restaurants in mainland China and roughly 240 in Hong Kong, said local partners will help speed up growth through new restaurant openings, particularly in smaller cities that are expected to benefit from increased urbanization and income growth.

The focus will be on key areas such as menu innovation, enhanced restaurant convenience and delivery. It intends to add over 1, 500 restaurants in the world’s No. 2 economy over the next five years.

McDonald’s originally wanted to raise up to $3 billion from the sale of the business, but later decided to keep a minority stake to benefit from exposure to future growth in China, a person with direct knowledge of the plans previously told Reuters.

The partnership will also aim to boost sales at existing restaurants, with menu innovation a key focus. Fast-food firms including McDonald’s and Yum Brands Inc are recovering from a series of food-supply scandals in China that have undermined their performance, Reuters reported. 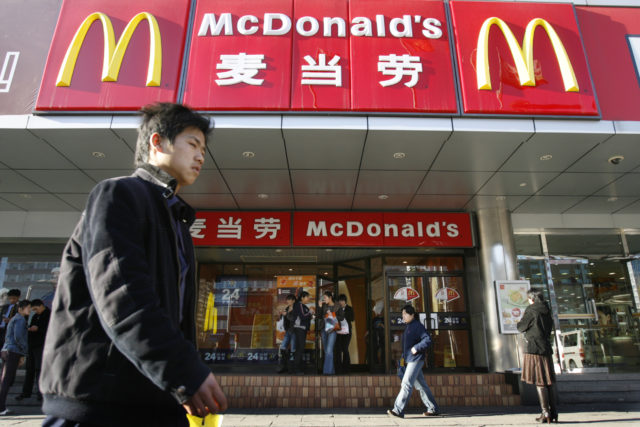 China’s working population is larger than those of the US and Europe combined, yet spending levels of China’s middle class are a small fraction of those in more developed countries. As disposable incomes rise, people will continue to spend more on leisure and dining out, particularly in tier 3 and 4 cities where there is great growth potential. As such, the market for Western Quick Service Restaurants is expected to continue to grow rapidly.

At the same time Shaun Rein, managing director at China Market Research Group told Reuters “McDonald’s globally overall is struggling and didn’t have the money or intellectual resources to focus on China.”

McDonald’s CEO Steve Easterbrook said, “This new partnership will combine one of the world’s most powerful brands. By working together, we will unlock even faster growth and be closer to the customers and communities we serve as McDonald’s works to be the leading Quick Service Restaurant across the Chinese mainland and Hong Kong.”

For Carlyle, this investment offers the chance to partner with an iconic brand with sizeable market share and growth potential in China. Carlyle has years of strong investment and operating experience in the global consumer and retail sector, and is well positioned to drive further growth of the new company.

Equity for this transaction will come from Carlyle Asia Partners IV. Carlyle has invested more than $7 billion of equity in approximately 90 transactions in China, as of 30 September 2016.