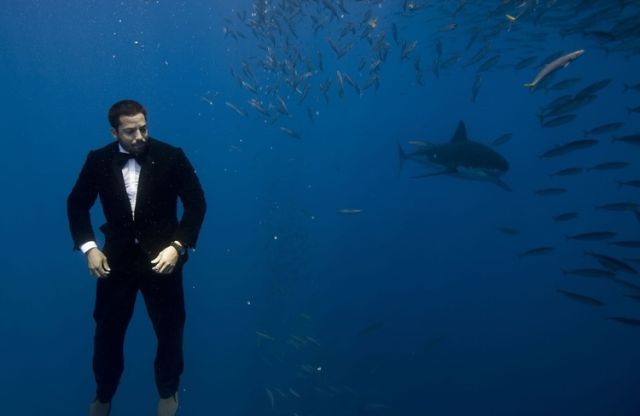 Famed Magician David Blaine accidentally shot himself in the throat while performing his bullet catch trick. Talk about a candidate for the Darwin Awards!

The shooting occurred in front of a live audience in Las Vegas and a video of it was aired on the British show “Beyond Magic.”

David Blaine had successfully performed the trick in the past. It entails holding a special metal cup in his mouth which is what actually catches the bullet. Blaine fires the rifle with by pulling a string attached to its trigger. Apparently this time the cup slipped off a rubber padding which holds it in place letting the bullet through. The magician’s throat was wounded as a result, but fortunately most of the force of the bullet was still stopped otherwise he would surely have died.

As the video aired, David Blaine explained to the audience, “Time just started to move really slow. When the bullet struck the cup, there was a high-pitched ringing in my ear, ” said Blaine. “And I felt an impact on the back of my throat.”

“I was sure the bullet went right through my head and that I was dead, ” he explained. “And then suddenly I became aware of the pain and it brought me back. At that moment, I realized that the mouth guard had shattered again, and I was alive.”

OK, we get it. The man is a magician and he needs to continually come up with new ways to shock audiences. People need to believe that there is a danger involved, hence the phrase “death defying.” But usually there is no real danger and the magician just makes the audience believe that one exists.

But this bullet catching thing is no magic trick. The whole point of magic is that the magician pretends to do something, but does not actually do it. What David Blaine does is more like someone skydiving without a parachute or jumping off a bridge. And those are stunts better suited to a circus than a magic show.