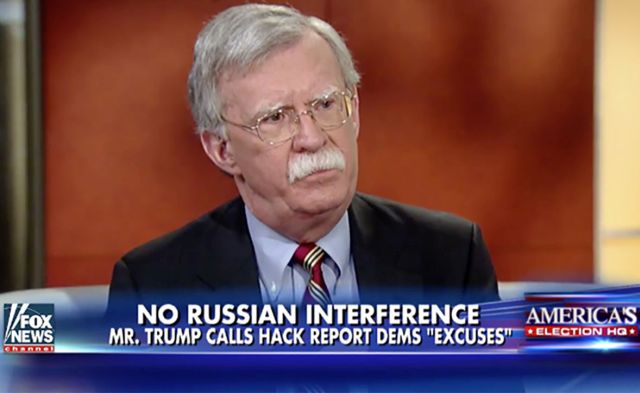 Former American United Nations envoy John Bolton has attacked President Obama for America’s abstention on the UN Security Council resolution two weeks ago condemning Israel. He also called on Donald Trump to retaliate against the UN over the vote.

Bolton, who served under President George W. Bush, made the comments Sunday while speaking with John Catsimatidis on AM 970 radio in New York.

"Obama's Parting Betrayal of #Israel" – read my latest op-ed in the @WSJ: https://t.co/y9yV45JFxK

On December 23, 2016, the UN Security Council voted 14-0 to condemn Israeli settlement building over the pre-1967 border and the Obama Administration declined to exercise America’s power of the veto to stop it, instead abstaining from the vote. The resolution went so far as to specify that all of the Jewish building anywhere in Jerusalem should be condemned, including the Jewish Quarter of the Old City and the Western Wall Plaza.

John Bolton said, “I think what Israel together with the incoming Trump administration should do is say, ‘Look, we’re going to give everybody a chance to do this over again, repeal this resolution and pass something that’s acceptable. And if not, we’re going to take steps to show our unhappiness, ‘”

“I just think it was a very bad idea. It was vindictive, because everybody knows that Donald Trump has a different policy view and this is intended to try to box him in, ” added Bolton.

And on the UN in general Bolton commented, “It’s the political bodies in the U.N. — the Security Council, the Human Rights Council, the General Assembly that are fundamentally broken. In my experience over a long period of time of dealing with the U.N. is that what they really listen to when it concerns the United States is our money.”

.@AmbJohnBolton: I don't think President Obama knows what it means to go out gracefully. pic.twitter.com/6qjNnKTEyc

Ambassador Bolton also had some very harsh words for President Obama over the UN resolution. He called the Obama Administrations decision to abstain on the vote “vindictive.”

But that was not all. John Bolton is clearly in the “Barack Obama hates Israel” camp. Bolton added, “President Obama has very negative views on the state of Israel. He thinks they’re the obstruction in the peace process in the Middle East, not the Palestinians.”

“In many respects what he did in this resolution by the Security Council … is try to define the boundaries of the state of Israel. It’s a rejection of 50 years of bipartisan American foreign policy and the doctrine of land for peace.”

Whatever one thinks of President Obama’s policies on Israel, he has only 18 days left in office and cannot really do much in that time to affect American-Israel relations.

Last week, John Bolton posted on his website an editorial condemning Barack Obama for the vote. It read, “Mr. Obama’s refusal to use Washington’s veto was more than a graceless parting gesture. Its consequences pose major challenges for American interests. President-elect Donald Trump should echo Ambassador Daniel Patrick Moynihan’s defiant and ringing 1975 response to the U.N.’s “Zionism is racism” resolution: that America “does not acknowledge, it will not abide by, it will never acquiesce in this infamous act.”

“Mr. Obama argues that Resolution 2334 continues a bipartisan American policy toward the Middle East. It does precisely the opposite. The White House has abandoned any pretense that the actual parties to the conflict must resolve their differences. Instead, the president has essentially endorsed the Palestinian politico-legal narrative about territory formerly under League of Nations’ mandate, but not already under Israeli control after the 1948-49 war of independence.”

“Resolution 2334 implicitly repeals the iconic Resolution 242, which affirmed, in the wake of the 1967 Six-Day War, that all affected nations, obviously including Israel, had a “right to live in peace within secure and recognized boundaries free from threats or acts of force.” It provided further that Israel should withdraw “from territories occupied in the recent conflict”—but did not require withdrawal from “the” or “all” territories, thereby countenancing less-than-total withdrawal. In this way Resolution 242 embodied the “land for peace” theory central to America’s policy in the Middle East ever since.

“By contrast, Resolution 2334 refuses to “recognize any changes to the [1967] lines, including those with regard to Jerusalem, other than those agreed by the parties through negotiations.” This language effectively defines Israel’s borders, even while superficially affirming direct talks. Chatter about Israeli-Palestinian negotiations is nothing but a truism, equally applicable to the U.S. and Canada, or to any nations resolving trivial border disputes.”