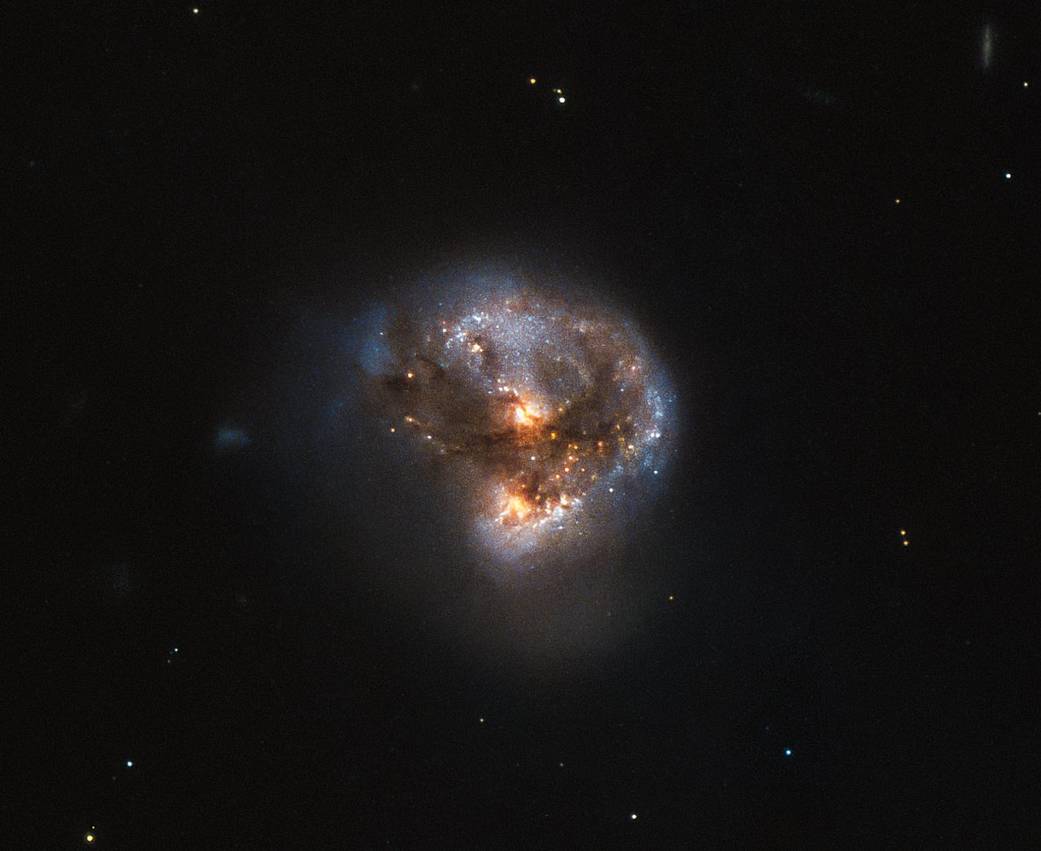 This galaxy has a far more exciting and futuristic classification than most — it hosts a megamaser. Megamasers are intensely bright, around 100 million times brighter than the masers found in galaxies like the Milky Way. The entire galaxy essentially acts as an astronomical laser that beams out microwave emission rather than visible light (hence the ‘m’ replacing the ‘l’).

A megamaser is a process where some components within a galaxy (like gas clouds) are in the right stimulated physical condition to radiate intense energy  (in this case, microwaves).

This megamaser galaxy is named IRAS 16399-0937 and is located over 370 million light-years from Earth. This NASA/ESA Hubble Space Telescope image belies the galaxy’s energetic nature, instead painting it as a beautiful and serene cosmic rosebud. The image comprises observations captured across various wavelengths by two of Hubble’s instruments: the Advanced Camera for Surveys (ACS), and the Near Infrared Camera and Multi-Object Spectrometer (NICMOS).

NICMOS’s superb sensitivity, resolution, and field of view gave astronomers the unique opportunity to observe the structure of IRAS 16399-0937 in detail. They found it hosts a double nucleus — the galaxy’s core is thought to be formed of two separate cores in the process of merging. The two components, named IRAS 16399N and IRAS 16399S for the northern and southern parts respectively, sit over 11, 000 light-years apart. However, they are both buried deep within the same swirl of cosmic gas and dust and are interacting, giving the galaxy its peculiar structure.

The nuclei are very different. IRAS 16399S appears to be a starburst region, where new stars are forming at an incredible rate. IRAS 16399N, however, is something known as a LINER nucleus (Low Ionization Nuclear Emission Region), which is a region whose emission mostly stems from weakly-ionized or neutral atoms of particular gases. The northern nucleus also hosts a black hole with some 100 million times the mass of the sun!

In this article:Finance, Galaxies, Universe, Image of the Day