A number of news sites are reporting that Beny Steinmetz, an Israeli billionaire, who has for some years been involved in a long-running dispute with authorities over rights to one of the world’s most valuable mining assets, has been detained under house arrest in Israel for questioning on suspicion of bribing government officials in Guinea.An Israeli police spokeswoman had said earlier today by text message, without identifying the person, that an Israeli businessman was being detained on suspicion of possible bribery and money laundering. Steinmetz and others are suspected of possibly paying tens of millions of dollars to senior state officials in the Guinean capital of Conakry, the spokeswoman said.  An investigation is being conducted in conjunction with enforcement agencies in the U.S.,  Switzerland and Guinea.Mining company BSG Resources later confirmed on Monday that Israeli police were indeed questioning Beny Steinmetz,  one of Israel’s richest men. BSGR is a mining development company that operates mainly in Africa. Whilst Steinmetz does not control its operations himself, and its shares are held by a complex offshore trust, he is said to be the “beneficiary” of the trust.

BSGR said in a statement “This development is in the aftermath of ongoing, and what BSGR believes to be obsolete,  investigations surrounding bribery and corruption against BSGR, ” adding it believed the allegations to be baseless.

It said the investigations were initiated by the government of Guinea together with international police organisations in the United States, Britain and Switzerland. It also said Steinmetz was an “adviser” to BSGR.

Guinea will “remain loyal to its principle of non-interference in judicial procedures, ” the Government of Guinea is reported to have said for its part by e-mail. “If this affair develops effects in Guinea, we will allow our judiciary to act as it has done in other cases of the same kind.”

The $20 billion Simandou copper project at the centre of these allegations was once one of the world’s most prized mining projects, at least until collapsing commodity prices in recent years have changed its’ perception a good deal, and taken the bloom off the rose at least until the next major world economic upturn. Simandou had been at the center of a power struggle for almost a decade, though, having attracted the attention of some of the biggest mining companies and powerful advisers including investor George Soros and an activist organization to which he is close, Global Witness.

BSGR has rejected outright any allegations that it obtained the right to half of the giant iron-rich Simandou deposit,  which it received in 2008, by bribing public officials in Guinea. BSGR later then sold 51 percent of its rights to Brazilian mining giant, and Rio Tinto rival,  Vale SA in 2010 for $2.5 billion. However, BSGR itself only received an initial progress payment of $500 million before litigation proceedings essentially shut down the joint venture – before it even really got off the ground. BSGR was later stripped of its rights in 2014 after a Guinea government committee said it found evidence of corruption in the awarding of the licenses. In the mean time world economic recession has essentially stalled the project completely for now.

Steinmetz has consistently argued that the allegations against BSGR were initiated by Rio Tinto Group, the world’s second largest mining group, as part of a targeted strategy to get back its former rights to Simandou – the rights that had been transferred to BSGR. Rio has denied those claims. 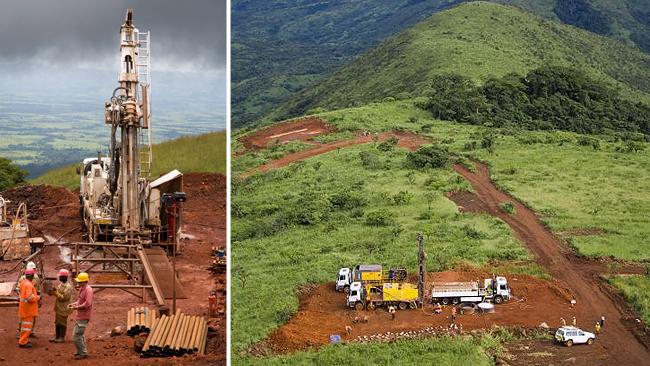 Then in January 2013, a grand jury in New York got involved and began investigating possible violations of the United States federal Foreign Corrupt Practices Act, and criminal money-laundering in connection with the Simandou mining concession, according to U.S. prosecutors. In 2014, Frederic Cilins, a Frenchman purportedly with ties to Steinmetz and BSG Resources, was sentenced to two years in prison for obstructing the grand jury investigation. Prosecutors claimed he tried to bribe a witness to destroy evidence and lie to U.S. investigators. Cilins was released just last January.

Separately, last week,  Mahmoud Thiam, a former mining minister in Guinea, was accused by U.S. prosecutors of laundering bribes he received as part of a plan to help a Chinese company win “near total control” of the West African nation’s valuable mining sector. Thiam, a U.S. citizen, was allegedly paid $8.5 million by an unidentified Chinese conglomerate, which was seeking exclusive rights to “a wide range of sectors of the Guinean economy” in addition to control of mining in the country. He was mining minister in 2009 and 2010,  federal prosecutors in New York said.

It remains to be seen whether in fact the current questioning now reported is more than just a “fishing expedition”, or whether any official investigations have actually found any real evidence of specific wrong doing, in what seems to be already something of a marathon exercise
In this article:Beny Steinmetz, Finance, mining company