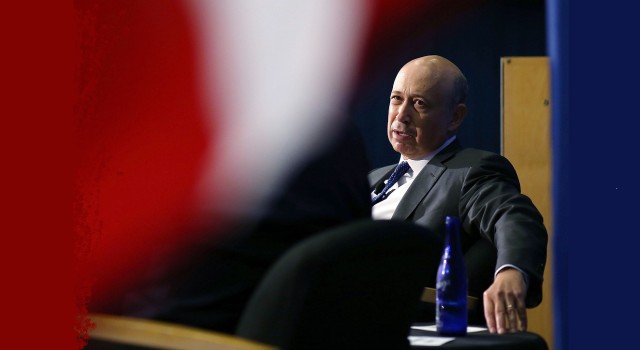 Goldman Sachs CEO Lloyd Blankfein told CNBC on Wednesday that the recent drop in oil prices may indicate deflationary pressures, not just an abundance of supply.

“The market is suggesting a protracted deflationary period, ” he said. “I don’t think it, but that’s the sensible way of interpreting what’s going on.”

Falling oil prices have been a drag on stocks. Brent crude dipped below $50 a barrel early Wednesday for the first time since May 2009, and U.S. oil prices fell below $47 after a 4 percent decline in New York trading Tuesday, CNBC said.

The S&P 500 fell for a fifth-straight session Tuesday. That marked the third-consecutive down day in 2015—the worst ever start to a year, a 2.7 percent decline for 2015, the broadcaster said.

Blankfein said he won’t extrapolate too much from the tough start for stocks but the macro picture still looks favorable, citing above-trend economic growth for the U.S. and the continued expectation for very low interest rates, adding “That’s a very good environment for asset prices and for stocks.”

The CEO appeared on CNBC’s “Squawk Box” program as the show debuted in its new home in New York City.

Meanwhile, AFP said plummeting Brent oil prices are putting pressure on North American shale, which has sunk hundreds of billions of dollars into investment, and could soon come crashing down.

Tempted by big returns, shale companies have borrowed more than $200 billion in bonds and loans, from Wall Street and London, to cover development and projects that may not even come to fruition. Oil producers’ debt since 2010 has increased more than 55 percent and revenues have slowed, rising only 36 percent as of September 2014 compared to 2010, according to the Wall Street Journal.

Fracking, the process of hydraulic fracturing and horizontal drilling on land, is much more expensive than the average oil rig. However, over the past few years, it has become relatively cheap and fast. Energy companies, eager to get in on the riches of the American oil boom, have been borrowing money faster than they have been earning it, AFP said.

On Sunday, the first shale company filed for bankruptcy. WBH Energy LP, a private Texas-based drilling group, filed for bankruptcy after saying that their lender was no longer willing to advance them money. The company estimates their debt between $10-50 million. There are hundreds more in the U.S. alone, accoerding to AFP.

Analysts believe North American shale needs to sell at $60-100 per barrel to break even on the billions of debt accrued by the energy companies. Indebted companies, fearing bankruptcy, may therefore be forced to keep selling oil, even at a loss, AFP said.