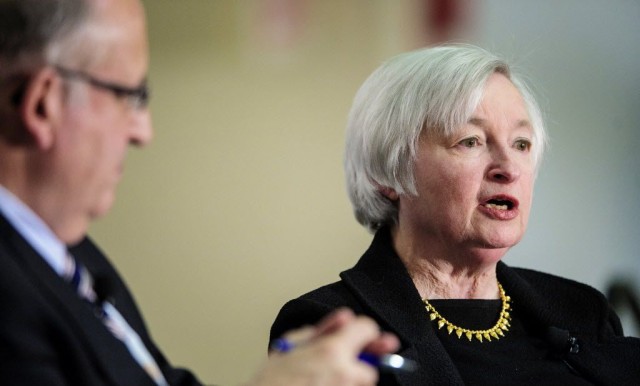 Federal Reserve officials will decide this week whether to make a critical change to their policy statement that would widen the door for interest rate hikes next year and effectively bet the United States will continue to shine in a gloomy global economy.

In one of the last major wild cards for financial markets in 2014, the U.S. central bank’s policy-setting committee is to issue the statement and fresh economic forecasts on Wednesday at 2 p.m., following a two-day meeting. Fed Chair Janet Yellen will then hold a news conference at 2:30 p.m.

The U.S. economy has strengthened and jobs have been created at a faster-than-expected clip since the Fed’s last meeting in October, when it repeated that benchmark rates were unlikely to rise for a “considerable time.” Officials will have to decide whether to replace that phrase despite below-target U.S. inflation and economic weakness in Europe and Asia.

As investors search for clues on when and how aggressively the Fed might move, here are the key things to watch:

The Fed has been toying with dropping the “considerable time” phrase since at least September. In October, it restated the pledge but made clear that rates could rise sooner if economic data were strong, and later if they weren’t.

If the phrase is dropped, as many Wall Street economists expect, the Fed could replace it with a pledge to be “patient” in an effort to prevent an abrupt market reaction that could throw off the economy’s momentum.

If it is kept, as centrist Fed policymakers Dennis Lockhart and John Williams suggested last week, Yellen would have to explain the need for such caution in the face of falling unemployment and signs that wage growth is edging up.

There is no question the Fed is approaching its goal of full employment after years battling the recession and its aftermath, so it will need to somehow acknowledge that in the statement. Unemployment is at a six-year low of 5.8 percent and monthly job growth has averaged more than 250, 000 over the last six months.

More troubling is the elusiveness of the Fed’s other goal of 2 percent inflation. The Fed’s preferred inflation measure stands at just 1.6 percent, and with global oil markets tanking, the dollar soaring, and the economies of Europe, Japan and China weakening, the threat is that it will slip further.

“To some at the Fed that’s a chasm, to others it’s a crack, ” said Carl Tannenbaum, chief economist at Northern Trust.

Many Fed officials expect any downward pressure on U.S. prices to prove temporary. The question is where Yellen stands.

The clearest hint of the Fed’s plans could come in policymakers’ fresh projections of how high rates should rise over the next few years. In September, they suggested the overnight federal funds rate could rise to about 1.25 percent by the end of 2015, and about 2.75 a year later.

Given U.S. economic growth in the last two quarters was the strongest in more than a decade, policymakers will also probably nudge up their GDP expectations for the next two years, and lower forecasts for inflation and unemployment.