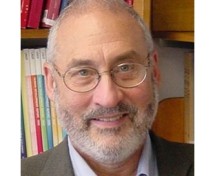 “If the facts don’t fit the theory, change the theory, ” goes the old adage. But too often it is easier to keep the theory and change the facts – or so German Chancellor Angela Merkel and other pro-austerity European leaders appear to believe. Though facts keep staring them in the face, they continue to deny reality.

Austerity has failed. But its defenders are willing to claim victory on the basis of the weakest possible evidence: the economy is no longer collapsing, so austerity must be working! But if that is the benchmark, we could say that jumping off a cliff is the best way to get down from a mountain; after all, the descent has been stopped.

But every downturn comes to an end. Success should not be measured by the fact that recovery eventually occurs, but by how quickly it takes hold and how extensive the damage caused by the slump.

Viewed in these terms, austerity has been an utter and unmitigated disaster, which has become increasingly apparent as European Union economies once again face stagnation, if not a triple-dip recession, with unemployment persisting at record highs and per capita real (inflation-adjusted) GDP in many countries remaining below pre-recession levels. In even the best-performing economies, such as Germany, growth since the 2008 crisis has been so slow that, in any other circumstance, it would be rated as dismal.

The most afflicted countries are in a depression. There is no other word to describe an economy like that of Spain or Greece, where nearly one in four people – and more than 50% of young people – cannot find work. To say that the medicine is working because the unemployment rate has decreased by a couple of percentage points, or because one can see a glimmer of meager growth, is akin to a medieval barber saying that a bloodletting is working, because the patient has not died yet.

Extrapolating Europe’s modest growth from 1980 onwards, my calculations show that output in the eurozone today is more than 15% below where it would have been had the 2008 financial crisis not occurred, implying a loss of some $1.6 trillion this year alone, and a cumulative loss of more than $6.5 trillion. Even more disturbing, the gap is widening, not closing (as one would expect following a downturn, when growth is typically fasterthan normal as the economy makes up lost ground).

Simply put, the long recession is lowering Europe’s potential growth. Young people who should be accumulating skills are not. There is overwhelming evidence that they face the prospect of significantly lower lifetime income than if they had come of age in a period of full employment.

Meanwhile, Germany is forcing other countries to follow policies that are weakening their economies – and their democracies. When citizens repeatedly vote for a change of policy – and few policies matter more to citizens than those that affect their standard of living – but are told that these matters are determined elsewhere or that they have no choice, both democracy and faith in the European project suffer.

France voted to change course three years ago. Instead, voters have been given another dose of pro-business austerity. One of the longest-standing propositions in economics is the balanced-budget multiplier – increasing taxes and expenditures in tandem stimulates the economy. And if taxes target the rich, and spending targets the poor, the multiplier can be especially high. But France’s so-called socialist government is lowering corporate taxes and cutting expenditures – a recipe almost guaranteed to weaken the economy, but one that wins accolades from Germany.

The hope is that lower corporate taxes will stimulate investment. This is sheer nonsense. What is holding back investment (both in the United States and Europe) is lack of demand, not high taxes. Indeed, given that most investment is financed by debt, and that interest payments are tax-deductible, the level of corporate taxation has little effect on investment.

Likewise, Italy is being encouraged to accelerate privatization. But Prime Minister Matteo Renzi has the good sense to recognize that selling national assets at fire-sale prices makes little sense. Long-run considerations, not short-run financial exigencies, should determine which activities occur in the private sector. The decision should be based on where activities are carried out most efficiently, serving the interests of most citizens the best.

Privatization of pensions, for example, has proved costly in those countries that have tried the experiment. America’s mostly private health-care system is the least efficient in the world. These are hard questions, but it is easy to show that selling state-owned assets at low prices is not a good way to improve long-run financial strength.

All of the suffering in Europe – inflicted in the service of a man-made artifice, the euro – is even more tragic for being unnecessary. Though the evidence that austerity is not working continues to mount, Germany and the other hawks have doubled down on it, betting Europe’s future on a long-discredited theory. Why provide economists with more facts to prove the point?