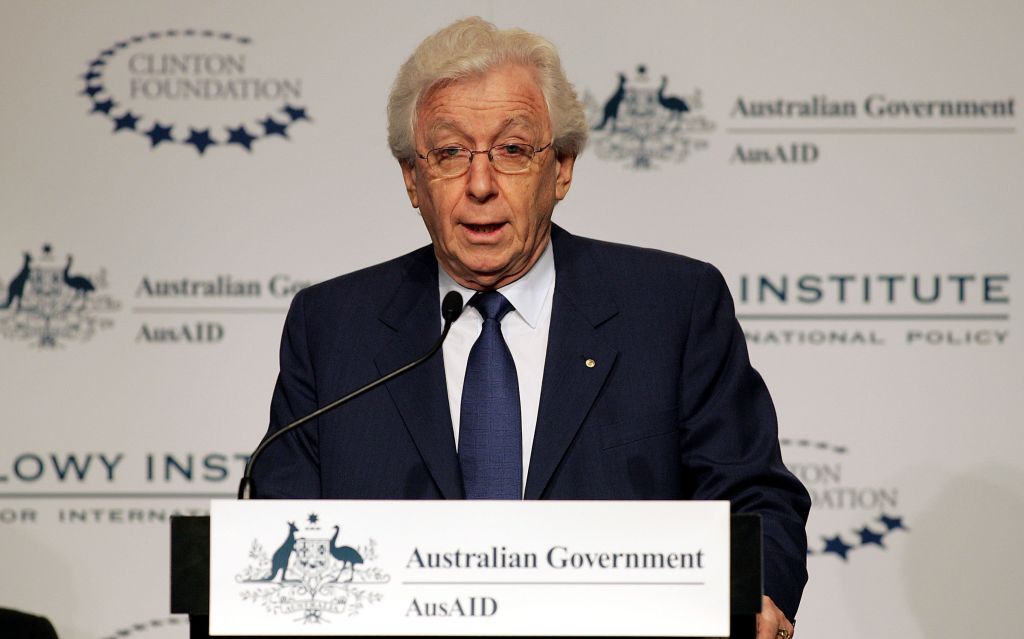 It seems master Australian retail shopping centre developer Frank Lowy’s grand restructuring of his prize international development company Westfield Group, and of its more mature sibling, the domestically oriented Westfied Retail Trust, may be running into some more heavy weather on the way to the Special General Meetings of both companies that are set to meet now on May 29th.

Westfield Group currently has a market capitalisation of about US$21.5 billion (A$23 billion) and the Westfield Retail Trust is valued in the market at around US$ 9.1 billion (A$9.7 billion).

At the beginning of December Frank Lowy had announced a corporate restructuring he was planning for the two groups, each of which is listed separately on the Australian Stock Exchange. The idea is to hive off all of the Westfield Group’s own remaining domestic Australian and New Zealand and to merge these with the existing Westfield Retail Trust.

Lowy had created the Retail Trust a few years earlier to take interests then in some of Westfield Group’s domestic assets, which at the time perhaps relieved some strains on his corporate balance sheet.

After the reorganization the Westfield Group is to then change its name simply to the Westfield Corporation, and continue as an international development “pure-play” for its investors, with massive new retail property developments completed, under way or planned, in the United States, in Europe and elsewhere.

The properties hived off and merged into the separate Westfield Retail Trust, which would henceforth independently manage its property portfolio itself, rather than pay fees to the Westfield Group as now. The newly-enlarged entity take the very corny name Scentre Group, indirectly reflecting its purpose

Under the terms of the reorganization, existing Westfield Group shareholders are to be given 48.6% of the shares of the newly enlarged entity, the Scentre Group, reflecting the substantial portfolio value of the large number domestic Australian and New Zealand properties to be transferred into it, and existing shareholders of the Westfield Retail Trust will get to keep 51.4% of that enlarged entity.

Other contentious point have included the allocations of debt between them, with substantial debt being transferred along with the portfolio interests, the setting up of am autonomous management team and board at the Trust to manage its own affairs and, especially, the price of about US$1.77 billion (A$1.9 billion) to be paid to the Westfield Group by the Retail Trust as a one time charge in exchange for the future existing management fees foregone, once it becomes a free-standing entity.

To establish trust in the deal independent experts were of course brought in to validate the actual arrangements selected. KPMG opined on behalf of the shareholders of the Retail Trust and Grant Samuels & Associates opined for Westfield Group’s shareholders.

Even so, after a lot of criticism of the details of the plan, said by some institutional shareholders to excessively favour the Lowy interests, the pot was just recently sweetened for holders of shares in the Retail Trust by reducing the debt allocated to the new Scentre entity by about US$280 million (A$300 million).

As a negotiator who likes to play hardball, Lowy has insisted this is his last word on the matter. However it seems a number of shareholders of the Retail Trust have continued to grumble, and now ABC News inAustralia is reporting they have received independent expert support that may indeed bring Lowy back to the table one more time before this deal closes, or so they may hope.

According to the ABC news report it seems an institutional advisory firm, the Melbourne-based Ownership Matters has told its clients that the new Scentre Group will demonstrate greater risk once the deal closes, due to its greater deployment of financial leverage post-reorganisation.

Even so Frank Lowy, and his two sons Peter Lowy and Steven Lowy, who increasingly manage the day to day operations of the Westfield Group as Co-CEOs, have almost certainly built up enough major institutional shareholder support already to survive this last minute effort to throw a monkey wrench into their plans.

Many of the big institutions involved may also may have mixed minds too, due to their holding substantial positions in both companies. Hence for these investors the overriding strategic benefits to both companies, moving forward, are in the end likely what they may prefer to prioritise and recognise, rather than wishing to hold it up over the comparative statics of comparing too closely some of the finer details going in to it.

Financial leverage is after all a concept with distinctly dual personalities – prudently deployed it can enrich those who use it; excessively lavished on its recipients it can sink the whole ship. The various pro-froma balance sheets, income and cash flow statements for the Lowys’ proposed transaction have all been distributed for several months now, and have likely been stress tested every which way by all who have looked at them

If no real dealbreaking warts have been found to date, the only likely remaining imponderable, therefore, becomes whether an additional pound of flesh perhaps remains to be extracted from the Lowys, father and sons, before the deed is done, rather than to cast huge doubt on the whole thing.