Stronach, who  owns  and manages several leading American  race tracks  wants to take the lead in introducing  drug reform in  the sport. 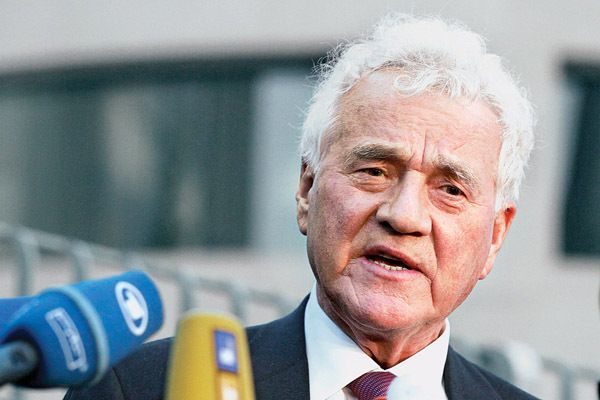 Frank Stronach is known to be a man of action, who knows how to get things done.

That’s the reason why owners and trainers who at best turn a blind eye to the illegal and unethical practice of  administering  performance enhancing drugs  to racehorses will be feeling considerably more uncomfortable doing so at the race tracks owned by the Stronach Group.

These include some of  America’s most popular tracks including Santa Anita, Gulfstream Park and Pimlico, as well as those managed by the group such as Golden Gate Fields, Laurel Park and Portland Meadows.

In a recent statement to the press Stronach announced  that his courses are ready to  introduce a series of  measures designed to  eliminate drug abuse within the sport in America, while at the same time reaching put to fellow  track operators, as well as  race horse owners as well as those responsible for regulating the sport  to “come together to do everything we can to prevent any abuse of our thoroughbred athletes.”

Stronach went on to propose in his statement  the banning of any individuals engaged in fraudulent or harmful activities from participating in our sport as well as emphasizing the support of the Stronach Group of all initiatives that will help to achieve a target of allowing horses to compete in races, while  free from the influence of medication in any form.

Among the steps that Stronach intends to take to end the practice, according to his statement, in order to  strictly control the  medications prescribed and administered on any of the race courses under his jurisdiction is to implement random drug testing as well as spot checks of all horses taking part in  races,  with owners and trainers found guilty of such practices on a recurring basis   standing the risk of being banned not only from a specific track, but from being involved in the  sport altogether.

The statement released by the Stronach Group also went on to emphasize that in  order for such legislation to be effective, any of the  reforms adopted must be  implemented by all of the US states where horse racing is legal, and  no later than September 1, 2014. ”

Frank Stronach was born and raised in the small town of Kleinsemmering, Austria in the early nineteen thirties, living through some of the most difficult times for the country, particularly the crushing Depression of the every part of the decade, which largely caused the Second World War. Surviving the war, Stronach was forced to leave school at the age of 14, becoming an apprentice for a tool and die maker.

In 1954, Stronach succeeded in getting out of Austria, first putting down roots in Montreal, before finally settling in Aurora, in the Canadian state of Ontario.

It was there that he founded Magna International, an international automotive parts company based in Aurora, Ontario. Considerably later Frank Stronach indulged himself and his love of horse racing by forming the Magna Entertainment Corporation, which specializes in horse-racing entertainment, with the company going on to acquire and operate some of the largest racetracks in the United States.