Despite starring separately in more than ninety movies, Douglas and Keaton have never appeared in the same one, not even any minor role- until now.

With both of the film careers going back to the early seventies, Douglas, one of Hollywood’s leading actors ironically has never shared the big screen with one of Hollywood’s best known leading ladies Diane Keaton- but that is about to change with the forthcoming release of Rob Reiner’s romantic comedy “And So It Goes.”

“And So It Goes ”due to appear in cinemas from the middle of July, will see Douglas play their part of, Oren Little  a widower slowly entering his golden years who has become bitter and apathetic to life. That is until his  son, with whom he has deliberately cut off contact, re-appears in his life and demands that he take care of off his granddaughter, Sarah, that he never knew existed.

Sarah is played by a captivating child actress, Sterling Jerins, who sparked off some amazing chemistry in Douglas, with the catalyst being the appearance on the scene of his  neighbor, Leah played by  Diane Keaton. Leah comes to the rescue of Oren, who have no idea how to connect with his “ newly arrived” granddaughter- and from then on the screen magic reportedly begins.

The film director Rob Reiner admitted to being surprised when he discovered that Douglas and Keaton have never worked together, but both were delighted to have the opportunity “and we were lucky to get them.”

During his almost  film appearances Douglas has played a number of romantic comedies, with the best-known probably being the “American President” alongside Annette Bening. Michael also starred alongside Kathleen Turner in three major box office successes, Romancing the Stone, Duel on the Nile and the black comedy “War of the Roses.”

Diane Keaton, on the other hand, has starred alongside most of Hollywood’s leading men, starting from Al Pacino in the Godfather trilogy, Woody Allen in “ Play it Again Sam” and a few other productions, Warren Beatty, Jack Nicholson and  Steve Martin. 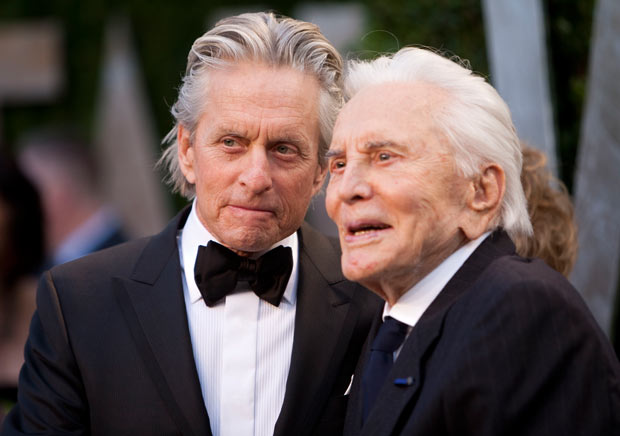 Michael graduated with a Batchelor of the Arts (BA) degree from the University of California, Santa Barbara, graduating with a, later going on to study acting at the American Place Theatre in New York City.

After appearing in a number of minor film roles, Michael’s first major breakthrough came in 1972 when he was offered a part in a new  TV series, playing a rookie detective  in  “The Streets of San Francisco” alongside veteran actor, Karl Malden.

In 1975, Douglas was handed an opportunity by his father to co-produce a film based  on Ken Kelsey’s novel “One Flew Over the Cuckoo’s Nest”.   Kirk Douglas  had bought the rights to produce the movie, as he intended to take the role of lead character, Randie McMurphy, having already appeared in the stage adaptation.

Michael took on the role of joint-producer with Hollywood veteran, Saul Zaentz with his first, delicate task involving telling his father, then in his late fifties that that particular ship had sailed as he was too old for the part, instead awarding the role to  Jack Nicholson who was almost twenty years younger than Kirk Douglas at the time.

It was apparent that Michael had  made the right call,   with Nicholson putting in an Academy Award winning performance. “ Cuckoo’s Nest was the second movie in history  to win all five major Academy Awards (Best Picture, Actor in Lead Role, Actress in Lead Role, Director, and Screenplay) in a single year with  Douglas winning his Oscar as producer.

Since then Michael Douglas has maintained his status as one of Hollywood’s most marketable properties, having  starred in as well as produced a series of highly successful movies.

One of the highlights of his career came in 1987 when he took the powerful role of Gordon Gekko  in Oliver Stone’s Wall Street for which he was the recipient of an Academy Award as Best Actor. Close to a quarter of a century later, Douglas reprised his role as Gekko in the follow up -Wall Street: Money Never Sleeps, also directed by Stone.