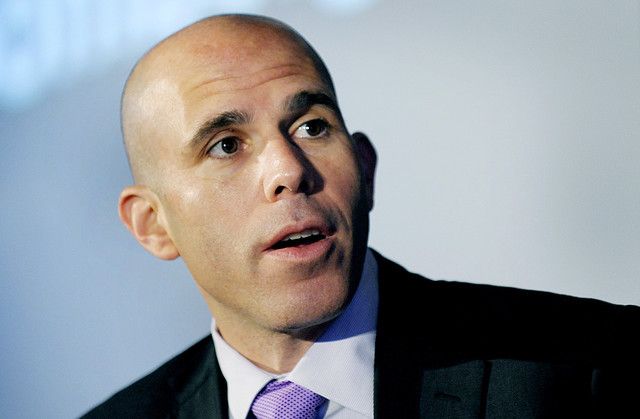 Scott Rechler’s RXR Realty has been trying to invest in lower Manhattan for some time. Now it seems he has succeeded, with Crain’s New York indicating he is now in contract to buy a commercial office building located at 61 Broadway.

With 787, 000 square feet of space on 33 floors the price Rechler is paying is reported to be US$330 million, or about US$419 per square foot. One might conclude Rexler is now regretting not having bid more aggressively last Fall for the iconic Chase Manhattan Plaza, where he was reportedly a losing bidder, and he is making up for it now at 61 Broadway.

Rechler is said to have then bid about US$700 million, or some US$322 per square foot, for the Chase Manhattan Plaza, a 60 storey 2.2 million square foot building owned, and about 50% occupied, by JP Morgan Chase.

JP Morgan acquired the property initially when they merged with Chase Manhattan Bank in the year 2000. Close to Wall Street and built originally during the reign of David Rockefeller as Bank President, the building even has its own entrance to the Wall Street subway station.

The winning bidder for the trophy property turned out to be Shanghai-based Fosun, run by billionaire Guo Guangchang. He subsequently disclosed in Hong Kong, where his company’s shares are listed, in October that he had agreed to buy the property, which was completed originally in 1961, for US$725 million. That represents a price six months ago of almost US$330 per square foot.

Now he is apparently willing to pay 27% more per square foot for a building that, while still an important property, hardly has quite the same iconic status.

Of course economic comparisons also depend on physical condition and, as well on the rate of lease turnover with the potential for replacement leases at higher values. Empty space is either a problem or an opportunity, depending on which way you think the market is going to move and how long it can take you to renegotiate or replace your leases. Both buildings are in excellent shape.

The Chase building will be losing all of the JP Morgan space, who are moving their people elsewhere, thus giving the new owner plenty of room to re-lease at what are currently improving market rents. These had already begun to improve after the fallout from the financial crisis, even with substantial still-existing vacancies in Lower Manhattan.

As financial tenancies have shrunk, or moved away, landlords have become adept instead at luring different kinds of tenants to Lower Manhattan buildings, away from frequently much higher rents in mid-town, including even in the case of sometimes Class B buildings.

The Chase Manhattan Plaza also has room to re-merchandise eventually 150, 000 of retail space on the lower and ground levels, in an environment for retail that has also been improving downtown with more people living there. Guo Guangchang will now be the beneficiary.

So the bottom line is that conditions clearly seem to have changed and Rexler has become simply willing to pay more recognizing that fact.

He is buying the 91 year old property from Broad Streeet Development, and likely still expects to be able to re-merchandise portions of the building himself, with a reasonably rapid rate of lease turnover in the next year or two, in order to make the purchase pay.