A New Weapon in the War Against Superbugs 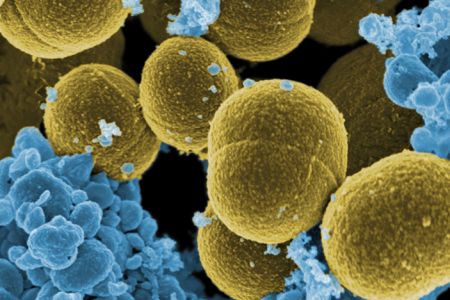 In the arms race between bacteria and modern medicine, bacteria have gained an edge. In recent decades, bacterial resistance to antibiotics has developed faster than the production of new antibiotics, making bacterial infections increasingly difficult to treat. Scientists worry that a particularly virulent and deadly “superbug” could one day join the ranks of existing untreatable bacteria, causing a public health catastrophe comparable with the Black Death.

Now research led by Dr. Udi Qimron of Tel Aviv University‘s Department of Clinical Microbiology and Immunology at the Sackler Faculty of Medicine has discovered a protein that kills bacteria. The isolation of this protein, produced by a virus that attacks bacteria, is a major step toward developing a substitute for conventional antibiotics. “To stay ahead of bacterial resistance, we have to keep developing new antibiotics, ” said Dr. Qimron. “What we found is a small protein that could serve as a powerful antibiotic in the future.”

Dr. Ido Yosef, Ruth Kiro, and Shahar Molshanski-Mor of TAU’s Sackler Faculty of Medicine and Dr. Sara Milam and Prof. Harold Erickson of Duke University contributed to the research, published in the Proceedings of the National Academy of Sciences.

Teaming up with a killer

Bacterial resistance is a natural process. But over the past sixty years or so, the misuse and overuse of antibiotics has pushed more and more bacteria to become more and more resistant, undermining one of the pillars of modern health care. Recently, the World Health Organization named growing antibiotic resistance one of the three greatest threats to public health.

Bacteriophages, often referred to as “phages, ” are viruses that infect and replicate in bacteria. Because they coevolved with bacteria, they are optimized to kill them. As proof of their endurance, phages are the most common life form on earth, outnumbering bacteria 10 to one. In places like the former Soviet Union, phages have been used to treat bacterial infections for the past hundred years. Harmless to humans, they inject their DNA into bacteria and rapidly replicate, killing their hosts.

“Ever since the discovery of bacteriophages in the early 20th century, scientists have understood that, on the principle of the ‘enemy of my enemy is my friend, ‘ medical use could be made of phages to fight viruses, ” said Dr. Qimron.

Breaking out the little guns

Dr. Qimron and his colleagues set out to understand how all 56 proteins found in T7, a particularly virulent phage that infects Escherichia coli bacteria, contribute to its functioning. They discovered that one of the proteins, called 0.4, impedes cell division in E. coli, causing the cells of the bacteria to elongate and then die. The protein is common to many bacteria and a similar process occurs in all bacteria, so the finding may have wide application.

No bacteriophage preparation has been approved in Western medicine for treating systemic bacterial infections. One reason is their inability to penetrate body tissues effectively. They are filtered effectively from the bloodstream by the spleen and liver, and occasionally neutralized by antibodies. But the 0.4 protein is much smaller than a whole phage, and so should be able to penetrate tissue better, getting to the bacteria to do its deadly work.

The major challenge for pharmaceutical companies will be figuring out how exactly to deliver the protein as a drug, said Dr. Qimron. In the meantime, he continues to hunt for other proteins that kill bacteria.