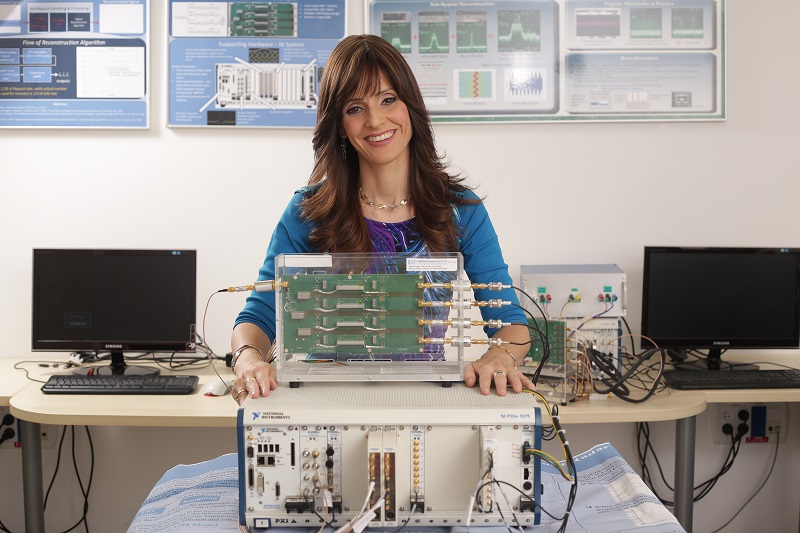 Professor Yonina Eldar in her lab

Professor Yonina Eldar has been selected for the 2013 IEEE Signal Processing Society Technical Achievement Award for her “fundamental contributions to sub-nyquist and compressed sampling, convex optimization and statistical signal processing.”

Professor Eldar, who heads the Sampling Research Laboratory in the Faculty of Electrical Engineering at Technion, is a member of: the Council for Higher Education (CHE) in Israel, the Young Academy of the Israel Academy of Sciences and Humanities, and the Commission for making higher education accessible to Haredim (Orthodox). She also serves as a research fellow at MIT and as a visiting professor at Stanford University. In addition, she consults for high-tech companies.

Professor Eldar has developed a new paradigm allowing to break through the Nyquist barrier, traditionally believed to be the ultimate limit for analog to digital conversion (ADC). She was able to exploit signal structure in the sampling stage in a hardware efficient way so as to reduce sampling rates, power, size and DSP rates, while attaining better communication performance.

Beyond her achievement in the development of theory and algorithms, Eldar achieved a global breakthrough in the field of sampling, when she built, along with her research students and development team at her laboratory, hardware prototypes and working demos (in the form of an electric card) that prove the theory, enabling sampling and processing of a wide class of continuous-time signals, at especially low rates. These methods can allow the miniaturization of a wide array of communication devices: from smart phones to ultrasounds, radars and more.

The technology she developed demonstrates practical application in many areas including improved performance of radar systems and fast three-dimensional ultrasound imaging. A potential market is the healthcare industry, where sampling speed translates into less exposure of patients to dangerous radiation emitting devices. From an economic point of view, this may serve as a great advantage, as it will allow for a greater number of patients to undergo testing. The defense industry is also very interested in this technology as it allows for fast scanning of a very wide frequency range.

Professor Eldar has been awarded many prestigious awards, among them the Krill Prize for Excellence in Scientific Research, The Michael Bruno Memorial Award from the Rothschild Foundation, the Weizmann Prize for Exact Sciences, the Hershel Rich Innovation Award, the Haifa Municipality Award for Women with Distinguished Contributions, and many others.

The IEEE Signal Processing Society Technical Achievement Award is foremost prize in the field of signal processing, awarded to researchers who have over the years contributed significantly to the theory and application of technical issues within the spectrum of areas in which the Society is engaged in, including publications, patents and recognized impacts in the field. This year Professor Eldar shares her prize with Professor Alfred Hero, a former head of the IEEE Signal Processing Society and a pillar of the community (he received the IEEE Third Millennium Medal).