Mazursky, veteran film screenplay writer, actor and director had his  name put the 2, 515th star to be embedded on Hollywood Boulevard in his name. 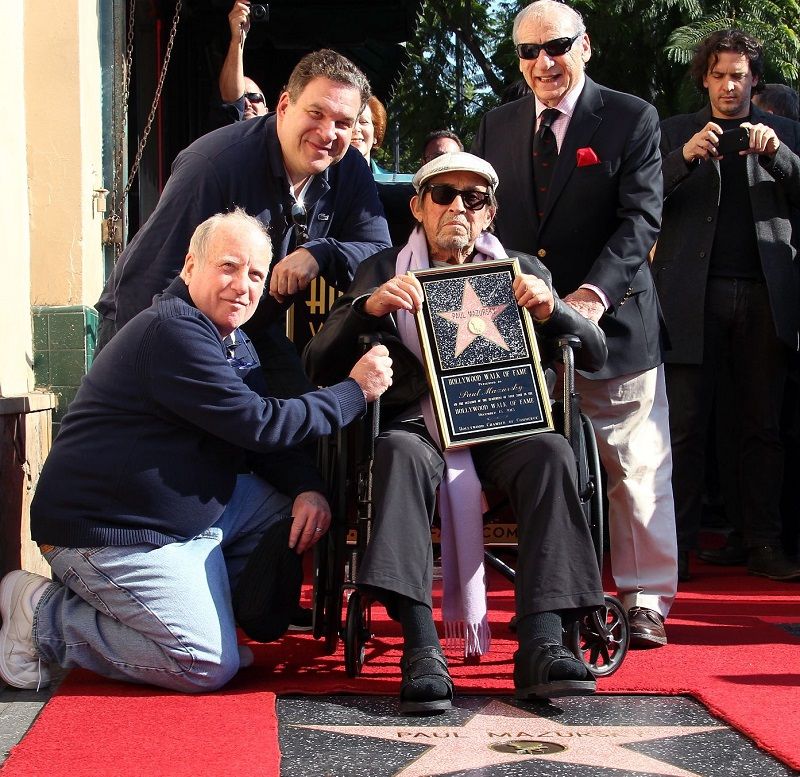 Paul Mazursky was recognized for his career spanning 60 years by having a star in his name embedded on the Hollywood Walk of Fame on Hollywood Boulevard.

What is usually a festive occasion was doubly so this time around last week due to the presence of Mazursky’s close friend and former writing partner, Mel Brooks himself a Hollywood legend in his own right. It was fair to say that Brooks stole the show thanks to his off-the-cuff comedy.

Brooks, whose friendship with Paul Mazursky goes back more than half a century when they worked together as screenwriters, did take some time out to praise Mazursky’s talents  by stating that he was both  a writer and director who “could see the human heart in all its glory and give it to us on the screen.”

Among the many other admirers who were there to see Mazursky, now 83, implant his star in the concrete were Richard Dreyfuss, who became close friends with Mazursky when he directed him in “Down and Out in Beverly Hills” in 1986  and Jeff Garlin one of the co-stars of  Larry David’s comedy show “Curb Your Enthusiasm”  in which both  Brooks and Mazursky took cameo roles during the series’ run.

Paul Mazursky’s s wife, Betsy and  his daughter Jill  were also present at the ceremony, which was conveniently held in  in front of  the famous Musso & Frank Grill on Hollywood Boulevard, a popular eatery of the  film community.

During his career, Mazursky was the recipient of  five Academy Award nominations, four of them for writing the  screenplay on Bob & Carol & Ted & Alice in 1969, Harry and Tonto in 1974, An Unmarried Woman in 1978 and Enemies, a Love Story in 1989. The other nomination was  as producer of An Unmarried Woman, which was nominated for Best Picture.

Mazursky directed Art Carney to an Oscar for best actor in “Harry and Tonto”.

Paul Mazursky made his debut as a film actor in 1953  in “ Fear and Desire, ”  which was the first feature film to be directed by Hollywood icon Stanley Kubrick. Over the years Mazursky also appeared in a number of important Hollywood productions, including  “The Blackboard Jungle, ” “A Star is Born, ” “Carlito’s Way, ” and  “Love Affair.”

Mazursky also took a cameo role in Mel Brooks’ classic comedy “The History of the World Part I. “

Mazursky gradually graduated from acting roles to writing screenplay, eventually making his  debut as a directior in  the 1969 comedy-drama “Bob & Carol & Ted & Alice.”  Paul went on to direct “Alex in Wonderland, ” “Blume in Love, ” “Next Stop, Greenwich Village, ” “Willie & Phil, ” “Tempest, ” “Moscow on the Hudson, ” “Moon Over Parador, ” “Enemies, a Love Story” and “Scenes from a Mall.”