As well as appearing in a series of concerts with Sting in the United States, Simon will be recognized for his charity work   at a  Carnegie Hall concert  in March of  next year. 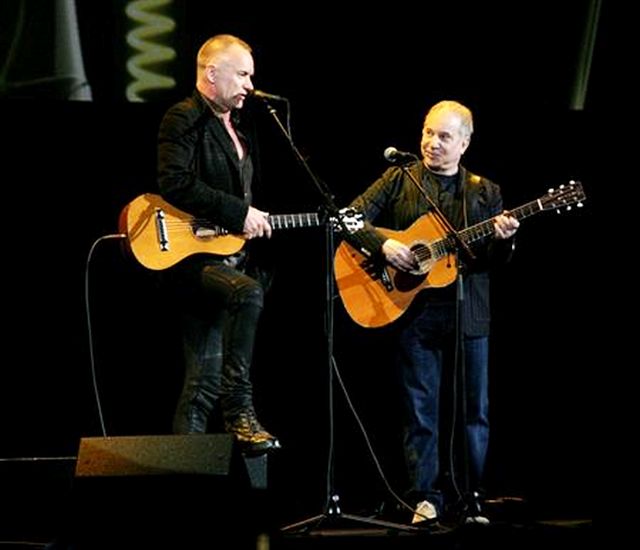 Paul Simon has set himself a busy schedule, at least for the beginning of 2014. Already signed up to do a number of concerts with English pop legend, Sting, aptly entitled Simon and Sting sing  On Stage Together, Paul  will be taking some time out from the tour to be the guest of honor at a concert organized by Carnegie Hall in New York on  March 31st  of next year.

The concert,  in recognition of Simon’s remarkable career achievements as well as his considerable charity work will be the central focus of  the World famous venue’s annual music education benefit, designed to raise funds for underprivileged youth through charities such as Young Audiences New York, Little Kids Rock, and  the Church Street School of Music .

In its tenth year the Carnegie Hall concert has succeeded in raising more than $1 million for various charities, with previous  honorees including Neil Young, Elton John,  Joni Mitchell, Bob Dylan, Bruce Springsteen and Prince, who was last year’s guest of honor.

Simon’s collaboration with Sting, which will get under way with a concert on February 8, 2014 in Houston, was born when the pair found themselves performing together in May, when they performed acoustic versions of some Simon’s classic songs as well as others penned by  Sting. Backing up the duet  will be both Paul Simon’s backing band as well as Sting’s band.

The concert itinerary will include solo performances from both Paul and Sting, while they will combine their voices to sing from the vast repertoire of Simon composed classics as well as some composed by Sting.

Apart from Houston,  Simon and Sting sing  On Stage Together are also scheduled to appear at  New York City’s  Madison Square Garden as well as Boston, Philadelphia, Washington DC , Seattle and San Jose.

During his career Paul Simon, now 72,  has been the recipient of no less than  12 Grammys for his solo and collaborative work, including a Lifetime Achievement Award Simon was inducted into the Rock and Roll Hall of Fame in 2001.

Five years later  was picked out by Time magazine  as one of the “100 People Who Shaped the World” as well as being chosen to be the first recipient of the Library of Congress’s Gershwin Prize for Popular Song in 2007.

Paul Simon was born in Newark, New Jersey , moving with his family to  Flushing, Queens, in New York City at the end of the war when he was just four years old.

It was there the “ Rhyming” Simon as he was best known in the music industry met his long term partner and collaborator  Art Garfunkel when they were both  11. The legendary partnership made their first stage performance at their sixth grade graduation   appearing in Alice in Wonderland. Even then their unique voice blended, and they began to perform at local events on a regular basis from the age of 13 onwards.

During his teens, Paul’s potential as a songwriter was coming to the surface and he wrote and even recorded a few minor hits.

After graduating from High School, Simon went off to study English at Queens College, Brooklyn. earning a degree in English literature. The next stage in Paul’s study plan was to study law at  Brooklyn Law School , but he dropped out to pursue his music career, while Garfunkel, just to make sure, completing his degree in mathematics at the Columbia University in Manhattan.

After deciding that a career in  law was not for him, Paul Simon spent some time in the swinging London of the Sixties, writing a number of songs in partnership with a young Australian Bruce Woodley of the Seekers pop group. One of them “Red Rubber Ball” was released in America  by The Cyrkle and reached No. 2 in the U.S.  charts.

Simon returned to the US  in early 1965, where he would soon  renew his partnership with Art Garfunkel, and it wasn’t long before the hits would start to roll out, the first major hit being “The Sound of Silence.” that made it to the top of the pop charts around the world.

During the mid to late sixties, Simon and Garfunkel produced some of the most loved and commercially successful music in that rich era in the history of pop, including four more classic albums that provided them with a number of hit songs- The Sounds of Silence; Parsley, Sage, Rosemary and Thyme; Bookends and Bridge over Troubled Water.

Simon and Garfunkel also wrote  the soundtrack for the 1967 Mike Nichols film The Graduate that starred  Dustin Hoffman and Anne Bancroft.

Sadly Paul Simon and Art Garfunkel went their separate ways  in 1970 when  their popularity was at its peak, with  Simon embarking on a  solo singer-songwriter, with equal success. One of the highlights of Paul’s solo career was the release of the album Graceland in 1986, inspired by the music of  South Africa.