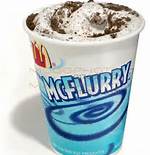 McDonald Israel, the entity that operates the 180 McDonalds retail outlets in Israel, is being sued for cheating on the amount of ice cream it puts in some of its ice cream cups.

An Israeli gentleman called Mafrash Attias has filed a claim in the local court requesting class action status against McDonald Israel on behalf of all its customers, for misleading and cheating consumers in the way they sell their ice cream here.

According to his claim, as a regular customer of McDonalds himself Mr. Attias often used to buy one of their soft ice cream products, called McFlurry which is marketed in Israel as “גלידה פיצוץ” – or “Ice Blast” if literally translated.

According to his statement of claim the Ice Blast product is sold at McDonalds in two sizes of plastic cup, small and large, and with a NIS 2 shekel price (about 50 cents) differential between them.

Mr. Attias goes on to claim that he eventually discovered that the contents of the two different sizes are, in practice, almost always barely distinguishable from one another, whether by the weight or the volume of their contents. He further claims therefore that the company’s sizing of the cups and pricing it places on them is in fact deliberately misleading to, and defrauding of, its customers.

He also asserts that on some occasions the large size can even hold less ice cream that its’ cheaper small sized alternative. Finally, he alleges that McDonalds marketing pitch in their stores tries to encourage customers to “size-up” for “only” 2 extra shekels.

In support of his claims Mr. Attias invited the independent Forensic Science Institute, which is located in Jerusalem, to carefully test the contents of ice cream purchased for the purpose at several McDonalds, and to document the results.

The claim describes that extensive physical testing was then carried out, by the Institute, on 24 separate cups of McDonalds ice cream product “Ice Blast”, half of them large sized and half of them small sized, sourced from four different McDonalds outlets all located in Jerusalem.

The claimant Mr. Attias attached the report of this testing by the Forensic Science Institute to the documents he presented to the court.

According to the claimant, the Institute examined both the volume of ice cream and its weight in the contents of all the different cups tested. Based on this the Institute concluded that there was indeed no significant difference between the weight of the ice cream sold in each of the large cups and of the small cups. It also concluded that there was no significant difference either between the volume of ice cream sold in large cups and the small cups.

On behalf of all consumers therefore, the claimant is asking the Court to compel McDonalds to return forthwith to its customers the price difference between the large and small cups, plus to compensate them as well for their “mental anguish”.

Based on a calculation of the amount of the “Ice Blast” ice cream sold over a two year period in the 180 branches of McDonald’s in Israel, and estimating the proportion of large cups sold each day out of the total, the amount of total compensation requested is estimated at NIS 24.5 million by the claimant, or about US$7 million.

In addition, the claimant asks the Court to order McDonald’s to immediately change the manner of its presentation and sale of ice cream in the future to honestly represent the true value of what it is selling to its customers.

So far we have only heard the claimant’s position and McDonald Israel will now present its’ defence. Then it will be for the court to decide.