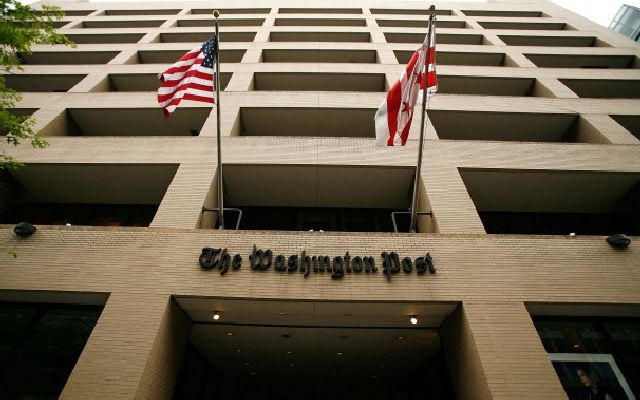 A few months ago Washington’s Graham family unloaded the Washington Post to Amazon founder and CEO Jeff Bezos for US$250 million after years of losses. Now the other shoe has dropped and the family company, Graham Holdings, is selling the Washington Post’s four storey headquarters building, and former printing site, to local Washington real estate development company Carr Properties.

The price is US$159 million and the deal is expected to close by this coming March, subject to the usual diligence process.

The Post will continue to occupy the building until its lease is up and then will move to new and more modern digs, a search for which has already begun.

The building Carr Properties is buying is located at 15th and L Streets in the north-west quadrant of the city. As well, certain adjacent parcels are also included, altogether 1150 15th St., 1515 L St. and 1523 L St have gone on the block. The sale also includes the land beneath an adjacent building Carr properties already owns – a 144, 000 square foot office building at 1100 15th St.

Carr Properties is run by Oliver T. Carr III, 56, its President and CEO, a company he created a few years earlier by privatizing a REIT called Columbia Equity, which he had also created, with substantial financial backing from JP Morgan.

Carr Properties has since built a very nice portfolio of buildings in and around Washington mainly, with a total square footage to date of nearly 3 million square feet, said to be worth around US$800 million.
Oliver Carr III is very much following in the footsteps of his father, Oliver Carr Junior, now 87, who had been king of Washington real estate for decades, finally selling the entire 26 million square foot portfolio of the original Oliver Carr Company to giant private equity firm Blackstone for US$5.6 billion, at just the right time in 2006.

This was pretty much close to the peak of the real estate market before the later 2007 crash. Unfortunately for the family the company by then was a publicly listed REIT in which the family’s shareholding had become very small – after an earlier brush with near-death in the early nineties.

So it goes, after the Carr family had been prominent in Washington real estate for more than a century since the family patriarch Solomon Carr arrived from England with his six children and settled in the community and developed a business building homes.

With five other siblings Oliver T. Carr III is today the youngest of four sons of Oliver T. Carr Jr., and his elder brother works with him today in Carr Properties in charge of development. With so much real estate knowledge still in the family, JP Morgan had good reason to back his venture.

The purpose of the new acquisition of the Washington Post’s building from the Graham family is to complete a significant land assembly on this whole block. Eventually the Washington Post building itself will be torn down and a 900, 000 square foot new, mixed use, development constructed on much of the entire block.

This made Carr Properties the natural and strategic buyer for the building, and gave Graham Holdings an easy transaction to source where the parties, who already knew each other, could also come to a meeting of minds early on.

As a great deal of new residential real estate has been booming, not far away on 14th Street, Carr has often said this would be a natural extension for the site with a mixed-use development. He stated in an earlier interview with the Washington Post, …“I would imagine a mixed-use redevelopment that would include both some office as well as some residential, perhaps hotel. It could add some vitality.”

With significant double-digit vacancy rates in the Washington office market these days, mixed-use certainly sounds the way to go. However, as with all previous business cycles newly constructed, or still under development, Class A properties of good design will tend to suck out tenants from Class B buildings mitigating the high overall vacancy levels.

To beef up its balance sheet in advance of some pretty aggressive growth plans Carr Properties also received just this August a major cash investment from Alony Hetz Properties and Investments, which is one of Israel’s largest real estate investment companies.

Alony Hetz invested US$330 million in Carr as a minority equity investment, taking an approximately 44% voting position in the company. Alony Hetz has had a similar such investment strategy in other markets, a little unusual for real estate, buying minority positions in Canada, in London and in Europe to participate in local markets indirectly through their equity partners.
With Alony Hetz on board, Carr now plans to grow its real estate holdings from roughly $800 million today to $1.5 billion with the projects it has in construction and on the planning board.

Oliver Carr said in August the new investment would allow him and his team to build the region’s preeminent pure play commercial office development company, to eventually go public and that he would have an advantage both over other private local firms and national real estate investment trusts that invest in Washington.

It is interesting to see the Washingtonian Carr family team up now with Alony Hetz, which is a real estate company publicly listed in Tel Aviv, founded by Nathan Hetz and Avi Wertheim.

With Alony Hetz now invested, Carr Properties is owned approximately 44% by Alony Hetz, and around11% by the Carr family itself and their friends – including James Clark President of construction giant Clark Enterprises. In addition the remaining around 44% is held by JP Morgan Chase, who are equal partners with Alony Hetz and who had helped create the company in the first place, backing Oliver Carr III when it put up US$502 million through its special situation property fund.

The current family patriarch Oliver T. Carr Jr. who is now 87, and still going strong with his own short-term office leasing company, is no doubt very pleased to see his son now leading the charge again and very much a chip off the old block.

Alony Hetz is controlled by Nathan Hetz, and by the Wertheim Group.

Nathan Hetz is a founder of Alony Hetz and has served as the company’s Chief Executive Officer, Director and principal shareholder since November 1989. He also serves on the board of companies in which Alony Hetz is invested, including Amot Investments, Carr Properties, First Capital Realty in Toronto, PSP Swiss Property AG and Energix Renewable Energy Ltd. Mr. Hetz received a B.A. in Accounting from Tel-Aviv University in Israel and is a certified public accountant in Israel.

In this article:Amazon, Finance, Jeff Bezos