The international coffee shop chain  will soon be operating a mobile branch running through the countryside  of Switzerland. 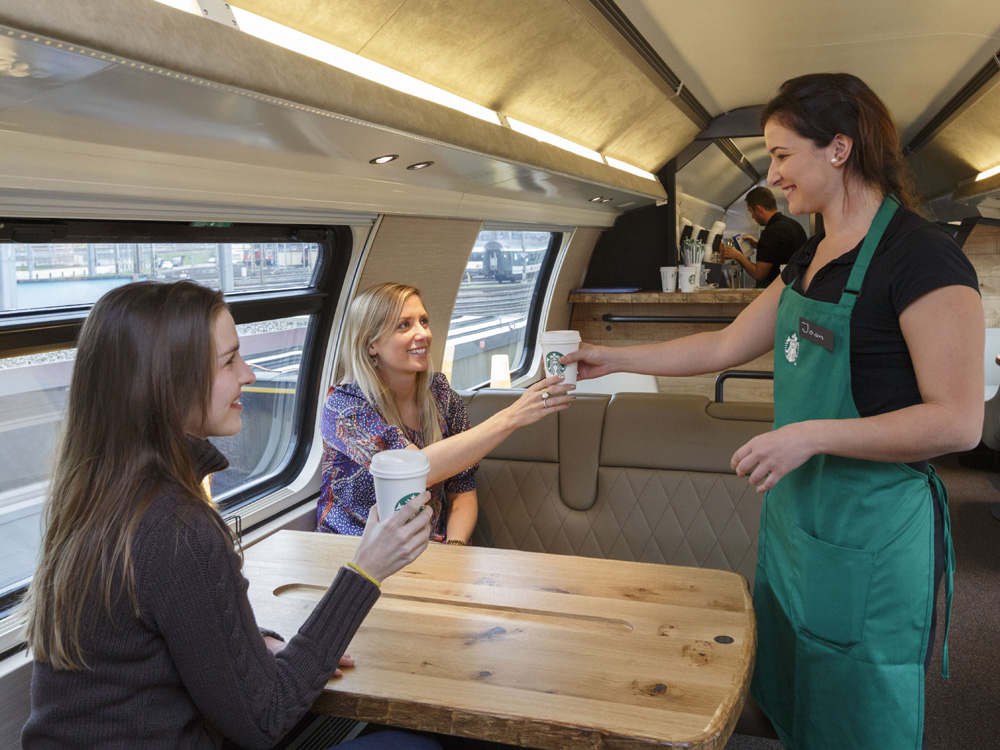 In a definite indication of things to come, global coffee shop chain  Starbucks recently announced that they have signed up and deal with the  Swiss Federal Railways (SBB) to operate Starbucks branches on their trains.

The deal was announced in conjunction with the unveiling of the first Swiss railways carriage that have undergone an entire conversion is now, to all intents and purposes, a Starbucks.

Based around a typical double-decker carriage used by most modern railways these days, Starbucks design team have to be complemented for doing a tremendous job in combining the most precise aspects  of Swiss design detailing and the standard Starbucks layout. According to the design team, the Swiss mobile coffee bar  certainly holds the record for the smallest in the chain.

A cross between a publicity stunt and a pleasant place for railway  commuters to pass their journey, the carriage itself is proud to stand out as it passes through the beautiful Swiss countryside thanks to the familiar  green logo and “Starbucks” emblazoned on the side along was a really carriage.

In charge of bringing the Starbucks concept to the railway tracks is Liz Muller, director of concept design for Starbucks who explained what an incredible and rewarding challenge it had been  to design the  first ever Starbucks on a train, with the need to combine functionality and beautiful design, whilst taking into account a variety of factors such as constant movement of the train, space limitation and stringent safety regulations.

The Starbucks  coffee carriage is split over  two levels, both of them with a common color scheme, in a relaxing combination of coffee-colored shades and tints. With seating for just  50 people, the design has obviously been  focused on serving passengers quickly and on relatively short journeys.

It is not difficult to foresee a future where throughout the world  Starbucks railway coffee bars will become as much a part of the scenario as their street corner cousins. The first  Starbucks coffee bar will make its first official journey on  the 06:36 AM Geneva Airport to St. Gallen route within the next few days.

In this article:Switzerland, Starbucks., Finance, Geneva