The ultra deepwater drillship, which was to begin drilling in the first quarter of 2014, is now not likely to start work before the second half of 2014.
– 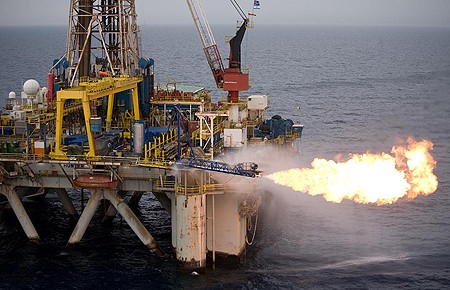 Drilling of the well to Leviathan’s oil-bearing strata, which was supposed to begin in December, has been postponed. No new starting date for the $250 million well has yet been set but market sources believe that the postponement could be for at least six months.Meanwhile there is continued uncertainty regarding development of Leviathan’s gas field and the final investment decision has yet to be taken by the Leviathan partners. In addition, expensive equipment intended for developing the gas field has been sent out of Israel.

Postponing Leviathan’s development could have major repercussions on Israel’s economy, which will face a natural gas shortage from 2015. At a recent electrical engineers conference Noble Energy VP Eastern Mediterranean Lawson Freeman said that regulatory uncertainty was the main reason delaying Leviathan’s development, such as the lack of an approved outline plan for bringing gas from Leviathan, without which Noble Energy cannot obtain rights to develop the field.

Leviathan’s partners are waiting for Antitrust Authority director general David Gilo’s decision on a suspected cartel in the licenses. The companies have invested over $800 million in Leviathan to date, mostly for drilling and planning the field’s development.

Postponing Leviathan’s oil well is the latest development in the saga. The Atwood Advantage ultra deepwater drillship, which was scheduled for delivery in September to drill the well, is still at the Daewoo shipyard in South Korea, and is now not likely to arrive before the second half of 2014. The ship was built to order for Noble Energy, after the rig that tried to reach the oil-bearing strata was forced to stop drilling at a depth of 6, 500 meters because of high pressure disparities at the great depth. Updated estimates give a 25% probability of finding 1.5 billion barrels of oil in various target strata beneath Leviathan’s gas-bearing strata.

Construction of the Atwood Advantage was completed in September. Noble Energy has committed to hiring the ship at a cost of $584, 000 a day, and planned to first use the ship at Leviathan before moving it to other deepwater fields offshore from West Africa and the Falklands.

Noble Energy said, “We remain committed to the development of the Leviathan field and continue to work hard to advance the project.”