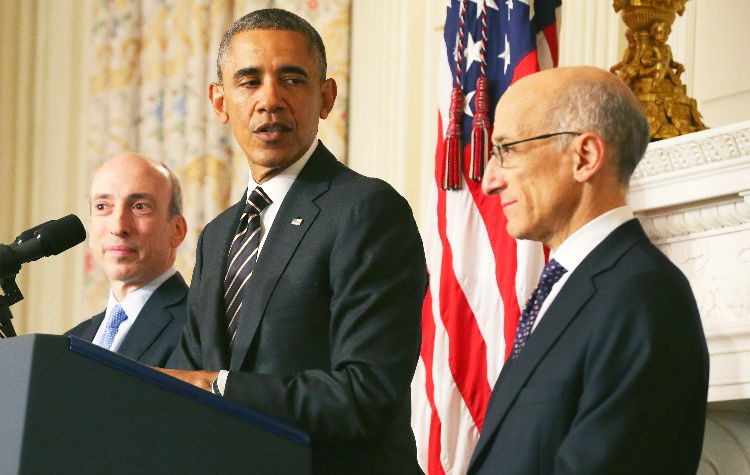 On Tuesday President Barack Obama announced he intends to nominate Timothy Massad to be Chairman of the Commodity Futures Trading Commission. The CFTC is the regulatory agency responsible for policing complex derviatives markets that played a key role in the 2008 financial crisis.

If confirmed by the Senate Massad will replace Gary Gensler, who came from Goldman Sachs and who transformed the small agency into a powerful Wall Street watchdog under new authorities gained from the 2010 Dodd-Frank law, now increasingly coming into force.

“I have every confidence that he is the right man to lead an agency that is designed to prevent future crises, ” President Obama said at a White House event announcing the choice.

The CFTC has been right in the thick of several battles over the implementation of the Dodd-Frank legislation, with reform advocates applauding Gensler’s efforts to write tough new rules for derivatives transactions, while Wall Street bankers and other business executives have warned, possibly in their own interests, of the dangers of going too far.

The significant role the global derivatives markets play in the modern financial sector, worldwide, came to the fore in 2008 by the near collapse and then takeover by the Government of American International Group. AIG had taken on the financial market risks other firms by insuring their credit default swaps. This then nearly brought down the insurer itself, as a potential systemic collapse which some had thought could never happen threatened its solvency.

By some estimates, the total value of all financial derivatives currently outstanding globally could be as much as one thousand two hundred trillion dollars – or twenty times the size of the global economy. That is an estimate made in 2011 year by writer, mathematician and hedge fund manager Paul Wilmott.

Timoth Massad will now face plenty of pressures as his nomination moves to the Senate. Most Democrats will likely push him hard to commit to carrying forward the approach laid out by his predecessor Gensler, and Republicans and some moderate Democrats will look for him to be more accommodating to the concerns of industries such as agriculture and other end-users that use derivatives to hedge risk rather than just to speculate. Sometimes though the diference between the two can be hard to distinguish.

Having previously been confirmed by the Senate for his existing job at the US Treasury, Timothy Massad ought to gain approval without too much of a fight however.

Massad has played a key role in winding down a key component of the 2008 bank bailout law, known as the Troubled Asset Relief Program, or TARP. TARP has been a critical element in restoring the financial system to its current relative health. It has been an unqualified success and today has few critics, which indeed should help his confirmation – everybody loves a winner in America.

President Obama said on Tuesday Massad was “quietly” successful at the “thankless task” of managing the unpopular program and joked that he would be effective at preventing future meltdowns as head of the CFTC because Massad “never wants to have to manage something like TARP again.”

The TARP programme eventually even reaped a windfall profit for the Government of nearly US$30bn, itself exceptional and a result that has been credited to Mr Massad.

“Tim is a guy who doesn’t seek the spotlight but consistently delivers, ” said President Obama, who urged the Senate to confirm him quickly.

Timothy G. Massad was confirmed June 30, 2011 by the United States Senate to serve as the Department of the Treasury’s Assistant Secretary for Financial Stability. In this role Massad has also been responsible for overseeing the implementation and wind down of the Troubled Asset Relief Program (TARP).

Prior to joining Treasury, Massad was a partner with the law firm of Cravath, Swaine & Moore LLP in New York for more than two decades. He had a diverse corporate practice, with an emphasis on corporate finance, international transactions and representation of some of the firm’s corporate clients.

Massad received a B.A. from Harvard College and a J.D. from Harvard Law School. He is married, has two children and lives in Washington, DC

In this article:President Obama, Finance