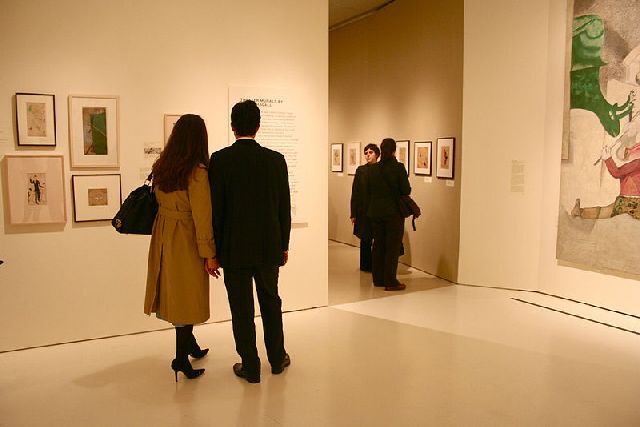 Another Marc Chagall exhibition? What else could be said and presented to the public that we haven’t seen yet ? Indeed almost everything has been explored. However, Senior Curator Emerita, Susan Tumarkin Goodman thought differently, she managed to find a very unexplored and uncharacteristic chapter of Chagall’s work as she is preparing to wrap up a long successful career of 30 years at the Jewish Museum in New York City.

I would say quite risky of her to do so , after all you can’t reinvent Chagall . Yet she succeeded in surprising us all and presented a most unfamiliar yet very significant period of Chagall’s work that he created during the very painful period in world history, especially for the Jewish people, from the rise of fascism in the 1930s through 1948.

Goodman says, “This may appear to be yet another Jewish Museum Chagall exhibition, however the work from the period of the 1920s and 1930s has largely been neglected, rarely exhibited and often misunderstood. Responding not only to the persecution of Jews, but also his exile in New York and the death of his wife, Bella, Chagall produced paintings with ominous imagery and a complex metaphorical language. “ 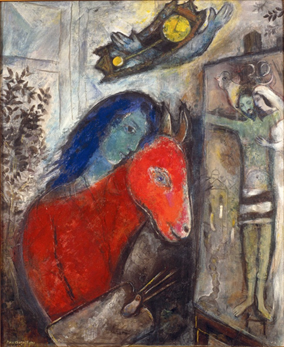 This was a very turmulent period in Chagall’s personal life too. From him being forced to escape in 1922 the Soviet Union to Paris, following the Bolshevik revolution, only to do it again some years later.

While he was finally enjoying a full creative life in Paris with his wife Bella and their daughter Ida, the rise of Nazism and the invasion of France, forced him to flee his productive life to a country he completely wasn’t familiar with – the USA.

Here, in this new land while watching the devastating events from afar his work, while still has his signature, lost it’s lyrical & joyous spirit. His feelings of melancholy and sadness covered every touch of his creative force. It deepened even more when his wife Bella died suddenly in 1944.

Chagall’s way of expressing his personal statements, emotions, feelings and thoughts was mainly by introducing in his paintings an unexpected recurring figure of crucified Jesus as a metaphor for war, jewish suffering and, in many ways, his own persecution.
“Jesus crucified on the walls of the Jewish Museum, isn’t it a little daring ? I don’t remember seeing anything close to this subject at this Museum. Wasn’t it a bit too daring to do so?” I asked the curator, Susan Goodman. 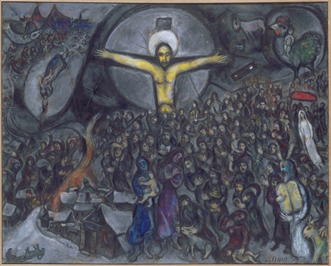 “There were years that you couldn’t show Jesus persecuted in this Museum. I must say there wasn’t even one complaint , on the contrary people have very interesting positive comments.

The figure of Jesus on the cross was one of Chagall’s most repeated subjects during the war years. This is a startling direction for the best-known Jewish artist in the world, so it is important to reevaluate this work in the context of Chagall’s life.

It is our intention to challenge the stereotype of Chagall as solely a painter of colorful, joyful scenes and help people know this artist in a new way.” says Ms. Goodman

Under the title, Chagall – Love, War and Exile, on view through February 2, 2014, the exhibition consists of 31 paintings, 22 works on paper, selected letters poems, a sketchbook started by his wife Bella, photos and ephemera, all installed sensitively in three beautiful rooms.

The flow of the exhibition invites the visitor to take a personal journey with Marc Chagall as we explore his sadness under deemed lights suitable to the spirit the artworks convey in a very truthful straight forward way. “This exhibition stands on its own and is important in the context of Chagall’s oeuvre. It is important because of the inclusion of extraordinary work which is little known in this country, ” adds Ms Goodman.

As one takes in new elements with some familiar colors , images and brush strokes as they are being unveiled in the four well organised sections of the exhibition, the viewer gets a history lesson from the simply written wall texts. Every section, “Time is a River”, “War and Exile”, “The Jewish Jesus” and “The Colors of Love”, are unveiled like chapters of a book. 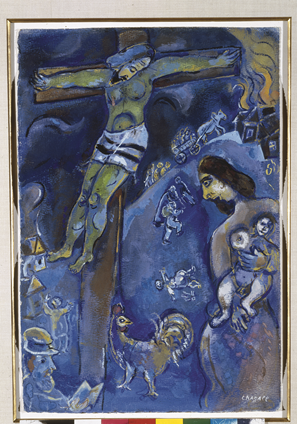 Collection of the Rastegar Family

The titles elegantly preparing us and pointing at what we’re about to see. The playful yet serious installation allows us to enjoy delicate works on paper beside large canvases from there to a sketchbook to a light sculptural installation. Never boring, always creating a new challenge to explore more.

In many of these painful canvases Jesus is depicted as a Jew. And why not? After all, Jesus was a Jew why not to take him back to his roots especially during such a crucial Holocaust time for his own people? It can be seen vividly in the work Obsession, 1943, showing the familiar yet emotionally squeezed, Jesus figure on the cross, while in the background a shtetl burns.

Very significant works were collected for this exhibition from private and public collections. A task that takes years to identify and get all the paperwork approved before the curator even starts thinking about installing it in the Museum’s space. I can only assume that collectors realised the importance of sharing and showing this unknown side of Chagall that never before was revealed in the USA.
One of my most favorite works in the show is Self Portrait With Clock, 1947 .

A very autobiographical work, showing Chagall’s inner struggle with his longing to his late wife and his realization of his new love – Virginia Haggard McNeil. looking towards a better future is exposed in the last section. A beautiful Play of lights and form installation lifting up the heavy melancholic mood that accompanied the exhibition . Here it’s time for Love, hope , renewal. Very appropriate not just for Chagall’s work after World War II but also seems like the Jewish Museum and it’s senior curator Susan Tumarkin Goodman too looking forward to a new chapter and hope for even a better future.

“Most people have different chapters in their life. I came here when the Jewish Museum was a very different place and have watched it and participated in its evolution over many years . I’ve been fortunate to have organized numerous exhibitions, either of major 20th century artists or group exhibitions relating primarily to Russian Jewish artists, or Israeli artists from this period.” says Susan Goodman

After numerous exhibitions and published catalogs including the current one Chagall: Love, War, and Exile (Susan Tumarkin Goodman Senior Curator Emerita at The Jewish Museum, will organize and curate one more exhibition for 2015 -Soviet Photography from the 1920s and 1930s . that will wrap up her work at the Jewish Museum but open new curatorial doors that definitely will include the most Jewish artist – Marc Chagall.