Just over a month ago, on October 2nd hedge fund activist Daniel Loeb of Third Point took a personal jab at Sotheby’s Chairman Bill Ruprecht, writing with great vitriol to the auction house after it announced it had put in place a shareholder rights plan to defend against potential unwanted take over activity.

He has been agitating for change at Sothebys since reporting a 5.7% stake in the company back in August, which he revealed in his October 2nd letter had increased to 9.2% , though it is not entirely clear what he knows about the art world. 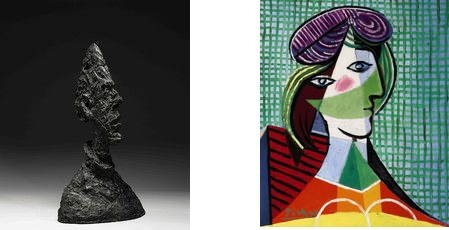 The best form of defence for any company when under attack is of course simply to deliver results. And for an auction house a very good proxy for expected results basically means selling a lot of pictures and sculptures for a lot of money.

Thus, when Christies had announced very disappointing results just two days ago for its Fall auction in New York of impressionist and modernist paintings, selling only US$144.3 million of art works, everyone was getting ready for the other shoe to drop when the Sotheby’s auction took place two nights later.

Well sorry to disappoint guys, but Sotheby’s pulled in a massive US$290.2 million of cash with its own impressionist and modernist auction yesterday – or amazingly exactly twice as much as Christies.

One in the eye for Daniel Loeb I should think. The highest priced piece that sold, Alberto Giacometti’s bronze bust of his brother Diego, fetched US$50 million. It was bought by York’s Acquavella Galleries, Sotheby’s said though the gallery may well have done so on behalf of an un-named client. Two Picassos together brought in almost $71 million.

What that means for Sothebys’ profits we will only know when they announce them at the quarter’s end, and there are obviously other auction categories to be held as well in the remainder of the season. But just looking at the optics of it all, if I were Bill Ruprecht I would be smiling just a little more easily after yesterday’s results with the hammer going down hard and often.

Even Steven Cohen with all his troubles was present, watching without making bids. Next week he will be back when he has about US$85 million of his own art up for sale in the Sothebys Post War Art auction coming up. US$85 million may not pay for his case that settled this week for an additional US$1.2 billion in fines, but it may very well cover quite a few of the legal fees.