Pact Group Industries Pty, is a Melbourne, Australia based packaging industry company controlled by Raphael Geminder. The company may be about to proceed with an initial public offering that could raise as much as US$616 million (A$650 million) before the year is out, according to the Wall Street Journal.

The normally very low profile Raphael and his wife Fiona Geminder are part of the publicity-shy, but immensely wealthy, wider Pratt family of which the founding patriarch was Richard Pratt, who died in 2009 at the age of 75.

The Pact Group itself was once part of the closely held Visy Industries paper recycling and packaging business that Richard Pratt built up when he grew up, after arriving in Australia from Poland in 1938 with his parents when he was four years old. His daughter Fiona is married to Geminder.

The Pact Group was then formed by Geminder initially in 2002, presumably as a spin out from Visy Industries, and today has built up a large presence of its own with manufacturing plants in Australia, New Zealand and Asia. Pact’s products include plastic packaging for many different foodstuffs; metal packaging of steel drums and other metal containers; plastic materials handling, industrial and technical products, and sustainability products and services.

The company is thought to have earlier attempted an IPO three years ago, without success during difficult market conditions. Geminder also apparently considered the possibility of a private equity deal last year as well, only to prefer to wait for a preferred public flotation option, which also usually tends to yield better financial terms than a private equity transaction.

As overall business conditions then improved, in May of this year the Pact Group first came to the credit markets with a successful and substantial offering of senior debt. The ratings agencies have publicly outlined the details of the package of credit facilities they are now rating for the Pact Group: there is US$885 million in senior seven year debt plus about another US$100 million in senior revolving five year money available in Australian and New Zealand local currencies.

Altogether therefore close to a cool US$1 billion, with an overall rating assigned of “Ba3”. One can infer, though we do not know, that it would be quite normal corporate treasury management policy for such new lines to primarily replace earlier lines of credit at lower interest cost, leaving also some additional head-room moving forward.

Accordingly, if the Wall Street Journal reporting is indeed accurate, and an IPO should now be coming on deck to proceed this would likely complete a refreshing of the Pact Group’s balance sheet.

Australian investment banking firm Macquarie Group are thought to be likely underwriters, together with Credit Suisse and Deutsche Bank. 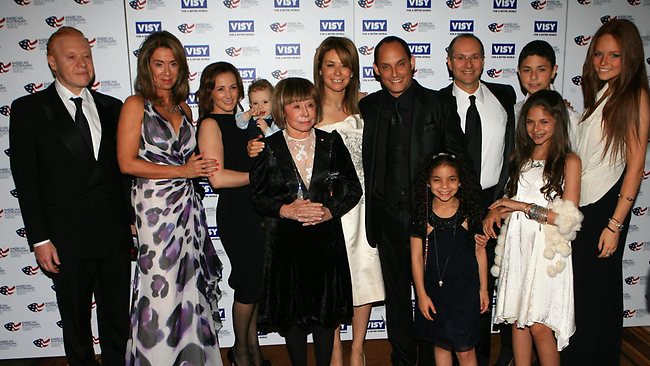 The Pratt family Raphael and Fiona Geminder in the center

His son-in law Rapahel Geminder then struck out on his own in 2002 forming the Pact Group, and when his father in law finally died in 2009 Richard Pratt’s son Anthony took over as Chairman of Visy Industries itself. In the United States, Visy is known today simply as Pratt Industries. There it is a major force in the corrugated box industry, and claims to be both America’s 5th largest corrugated packaging company and the world’s largest, privately held, 100% recycled paper and packaging company – recycling over 3, 000 tons of paper every day.

Altogether therefore, a family with impressive accomplishments, and one that has survived the change in generations that can sometimes be fatal to family dynasties.