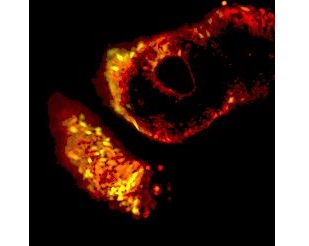 One of the obstacles to employing human embryonic stem cells for medical use lies in their very promise: They are born to rapidly differentiate into other cell types. Until now, scientists have not been able to efficiently keep embryonic stem cells in their pristine stem state. The alternative that has been proposed to embryonic stem cells – reprogrammed adult cells called induced pluripotent stem cells (iPS cells) – have similar limitations. Though these can differentiate into many different cell types, they retain signs of “priming, ” – commitment to specific cell lineages. A team at the Weizmann Institute of Science has now taken a large step toward removing that obstacle: They have created iPS cells that are completely “reset” to the earliest possible state and maintained them in that state. Among other things, this research may, in the future, pave the way toward the ability to grow transplant organs to order. The findings are published today in Nature.

Since they were first created in 2006, iPS cells have been touted as an ethical and practical substitute for embryonic stem cells. They are made by inserting four genes into the genomes of such adult cells as skin cells. This turns back the developmental clock almost all the way – but not completely – to an embryonic-stem-cell-like state. Dr. Jacob Hanna of the Institute’s Molecular Genetics Department and his team, including research students Ohad Gafni and Leehee Weinberger and researchers in the Israel National Center for Personalized Medicine, realized that inserting genes to reset the stem cells was not enough. One also has to put the cells’ drive to differentiate on hold.

One hint that this might be possible was the fact that the mouse embryonic stem cells used in many lab experiments are easily preserved in their “naïve, ” unprimed state, and they don’t present some of the other problems that human ones do. Hanna and his group realized that if they could understand how the mouse embryonic stem cells manage to refrain from differentiating in the lab, they could apply it to the human versions. Through lab experiments and genetic analysis, they worked out a “treatment” for the iPS cells in the lab dish to damp down the genetic pathway for differentiation.

Next, they injected the treated iPS cells into mouse blastocysts – early-stage embryos containing only a few cells. If the team’s iPS cells were truly naïve, as well as viable, they would grow together with the mouse cells. Adding a fluorescent marker to the iPS cells enabled them to trace what happened to those stem cells in the developing embryo. Fluorescent imaging after ten days (they were not grown to term) indeed revealed that the embryos contained both mouse and human tissues.

Hanna: “These cells correspond to the earliest stages of human embryonic stem cells that have been isolated. We managed to freeze what is essentially a very fleeting situation and to produce a new, naïve, pluripotent state in stem cells.” These findings may have many uses in biomedical research, specifically in gene therapy research, as well as genetic engineering. Hanna and his team plan to continue investigating the “humanized” mouse embryos, in which they hope to find ways of directing the development of human tissue into functional organs.

In this article:scientists, Weizmann Institute of Science, Finance, Stem Cells