Mekel, only the second Israeli to ever sign for an NBA club, has already  shown the Dallas Mavericks what he can do. 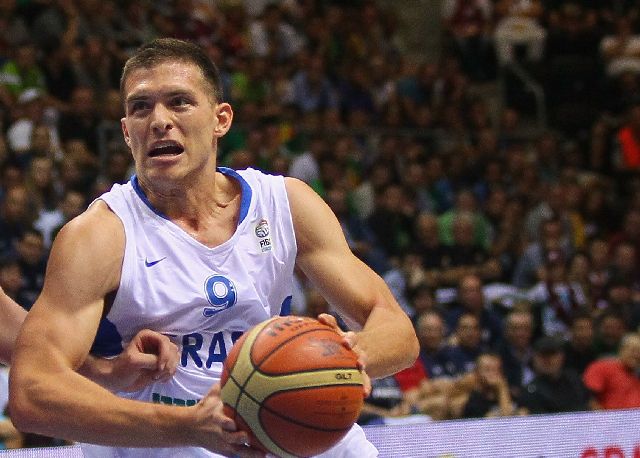 With the start of the NBA season just a few days away, Dallas Mavericks coach Rick Carlisle is reported to be very impressed with Gal Mekel, their pre-season signing and only the second Israeli ever to play for an NBA side.

According to Carlisle Mekel, who plays point guard, has impressed in training, as well as taking full advantage of being able to start in four of the Maverick’s pre-season warm-up games due to the absence of one of the star players while Jose Calderon who was unavailable due to injury.

In their final match before the season gets underway on the thirtieth, Mekel was on the parquet for a total of 21 minutes finishing the match with seven points and six assists, and helping the Mavericks win a hard-fought match 89-83 against fellow NBA team Charlotte Bobcats.

Mekel’s performance stood out even in a team that was packed with local and international superstars, including Germany’s Dirk Nowitzki as well as Spain’s Calderon, who returned from injury to make an appearance.

After the match Mekel was visibly happy with his performance coming off the bench to make an impression on the match.

Gal is well aware of the fact that he will begin the official NBA season in the role of backup point guard, meaning that he will come up against the opposition’s second unit after coach Carlisle has had the chance to assess how the game is progressing. Basketball pundits in the USA are estimating that Mekel should get a number of chances to take a more prominent role in the team as the season progresses, with the Maverick’s team roster contains a number of veteran players, who are more prone to injury.

Also giving young Gal a pat on the back for his efforts is José Calderon himself. Calderon, a nine-year NBA veteran said of Mekel that he has been doing a great job and has adjusted well after have thrown a little in the deep end. “Gal was forced to learn a lot during his first games while other more experienced players were recovering from injury, although it was productive for him to acquire invaluable playing experience.” Calderon summed up his assessment of Mekel’s progress so far.

With the Dallas Mavericks season set to get underway on October 30th against the Atlanta Hawks, Gal Mekel will be hoping to get some playing time in, before going into in a Texas derby against their major rivals rival Houston Rockets on November the 2nd, where the other Israeli playing in the NBA, Omri Casspi, is also a starting player. The meeting will be a historic occasion, marking the first time that two Israelis have appeared on the same court in an NBA match.

Omri Casspi and Gal Mekel found themselves facing off in the United States for the first time, in yet another pre-season friendly, although   Houston Rockets proved to be too powerful for  Dallas Mavericks, winning  100-95.

Both players began the game held in Houston’s Toyota Center on the bench, with Mekel  coming on for Dallas late in the third quarter, after  Dirk Nowitzki was sent packing for knocking Casspi to the ground on a fast break. During his twenty-two minutes on the court Mekel added a further nine points and six assists to his pre-season tally.

Gal Mekel was born and raised in the town of Petah Tikva in the center of Israel. Gal began playing basketball initially for the Hapoel Tel Aviv youth team, whereas of playing ability eventually caught the eye of basketball giant Maccabi Tel Aviv. He was signed to the club in 2001 at the age of 13, was part of the team that won the 2005–06 Israeli Youth League.

Shortly after finishing youth ages, Mekel made his first trip stateside joining Wichita State Shockers playing in the National Collegiate Athletic Association (NCAA). During his first season (2006–2007) Gal, then aged eighteen, got off to a slow start, but by the middle of the season had become a regular fixture in the team, finishing up with a season average of 13 minutes and four points per game.

During his second season in the shootout, Mekel statistics improved to a level of 9.3 points per game and 3.7 assists while remaining on the court for an average of 30 minutes per game. Despite Gal’s efforts the Wichita State Shockers’ season’s performance was pretty shocking and an end of the season he decided to return home to Israel, where a professional contract from Maccabi Tel Aviv awaited him.

Mekel turned out for Maccabi Tel Aviv for most of the 2007–08 season, the following season being loaned out to Hapoel Gilboa Galil, known for being an incubator for promising young talents.

After completing a successful season with Galil, Mekel returned to Maccabi only to discover that competition for places in the starting five was exceptionally fierce, and within six months he was back on his way to the Galilee and Gilboa/Galil, where he became a key member in the team averaging 7.5 points and 4.3 assists in 25.5 minutes per game and ironically a part of the team that defeated Maccabi Tel Aviv in the final of the national cup.

During the close season of 2011/2012, Mekel signed a two-year contract with Italian team Benetton Treviso. During his first season with the club, Mekel made it as far as the Eurocup last 16, which was to be the highlight of his short and unsuccessful stint in Italy as at the end of the season, Benetton Treviso were forced into bankruptcy .

Back in Israel, Mekel signed up for a season with Maccabi Haifa where he enjoyed a partially successful season, leading his team to second place in the National League, as well as finishing losing finalists in the national cup to his former club Maccabi Tel Aviv, with the only consolation being winners of the local league cup, this time defeating Maccabi Tel Aviv in the final with Mekel scoring 21 points and 7 assists, and most importantly catching the attention of the Dallas Mavericks.

In this article:NBA, Dallas Mavericks, Finance