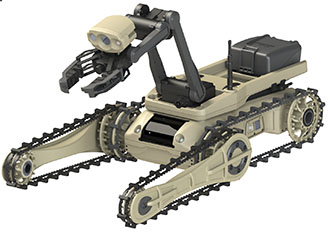 / By Ran Dagoni, Washington /
The US Department of Defense is fast-tracking its deployment of stair-climbing Israeli developed micro-robots with US Army Special Forces. The robots, called the Micro Tactical Ground Robot (MTGR), were designed by Tel Aviv-based start-up Roboteam Ltd., and are manufactured by its McLean, Virginia, subsidiary Roboteam Inc., reports “Defense News”.The micro-robot and members of its family are on display at the Israeli pavilion at the Association of the US Army (AUSA) 2013 Annual Meeting and Exposition, which opened on Monday at the Walter E. Washington Convention Center in Washington DC Association of the US Army (AUSA). 15 Israeli defense companies are among the hundreds of exhibitors at the exposition. Among the products generating interest are the David’s Sling medium-range missile interceptor system, developed by Rafael Advanced Defense Systems Ltd. and Raytheon Company (NYSE: RTN); and the Iron Dome short-range missile interceptor, developed by Rafael, which is being presented as one of the few battle-tested missile interceptor systems.

Rototeam’s executives say that the MTGR weighs less than nine kilograms, carries its weight in payload and is built to clear obstacles, climb stairs and conduct complex maneuvers in extreme terrain. Its five onboard cameras, internal microphone and infrared laser pointers generate intelligence and targeting data 360 degrees around the vehicle, and has line-of-sight operating range of 530 meters. It uses secure encrypted radio voice and video streams to communicate tactical operators and higher command staff. It can be carried by one soldier and has a top speed of 3.2 km/h.

Fast-tracked testing and fielding of the Israeli-designed system is part of a 40-month Pentagon program that extends through 2015 at an estimated cost of $15.7 million.

The MTGR is Roboteam’s first of a family of tactical ground robots. It is also displaying a 1.1-kilogram Individual Robotic Intelligence System (IRIS), which functions as a mobile camera for a squad, and can be sent through air vents into a basement or balcony for reconnaissance. It has also developed the Probot (Professional Robot), a 120-kilogram 4-by-4 that carries nearly double its weight in payload, which was designed for logistics delivery, medical evacuation, and a range of public safety missions. The Probot joins an infantry squad in the field.

Roboteam was founded in 2009 by co-CEOs Yosi Wolf and Elad Levy, veterans of the Israel Air Force’s Shaldag unit. They began working out of a small apartment owned by Levy’s grandmother in Tel Aviv’s suburbs. Wolf told “Defense News”, |We operate like a technological Seyeret Matkal. Some 90% of our workforce has an operational background, with access to the IDF as our backyard for testing.”